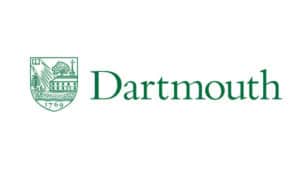 Dartmouth College is a private university in Hanover, New Hampshire, United States. The school, established in 1769 by Eleazar Wheelock, is a part of the Ivy League group. Recognized as the ninth-oldest institution of higher education in the United States, it belongs to the nine colonial colleges chartered prior to the American Revolution.

Dartmouth is also considered by many as the most beautiful. It can be found between the green mountains of Vermont and the white mountains of New Hampshire. Spanning 269 acres, the university has its own share of picture-perfect views. It is also widely known for its solid Greek culture, focuses on undergraduates, and enduring campus traditions.

The university has always been among the highest-ranked universities in the US, according to different institutional ranking bodies. It has been cited as a top university for research and undergraduate teaching as well.

It’s worth noting, however, that admissions are not founded on academics or book smarts alone. Exceptional applicants are separated from the thousands of other qualified candidates due to their intellectual curiosity. They were also chosen because of their drive to be a positive member of a diverse community and passion for academics.

The school looks for students who will contribute to the community, either inside or outside the classroom.

Prepare for the SAT, as it will help determine your admission into Dartmouth. Online SAT prep is available through Caddell Prep here: https://caddellprep.com/sat-tips-tricks/2016-redesigned-sat/

This has been the largest pool of early applicants, making for an all-time low early decision acceptance rate for the school’s college admission.

For the Class of 2021, Dartmouth College accepted 1,881 students from the regular decision applicant pool of 21,395 which made an overall admissions rate of 8.79%.

Approximately 4,400 undergraduate and 2,100 graduate students compose Dartmouth. Based on an analysis, the middle 50% of admitted students garner a score between 660 and 770 on the math, verbal, and writing sections of the SAT. When it comes to the ACT front, they score between 29 and 34.

Dartmouth does not require a minimum average GPA for undergraduate admission and says that each college application is reviewed holistically, regardless of GPA.

The average GPA at Dartmouth is 4.11. Although the college does not require an applicant a minimum GPA, this will show your ability to excel in academics so you need to have an average GPA or higher. But if your GPA falls below the average, this means that you need to have a higher SAT score, and ACT scores to compensate and be a good competition against other students with higher GPA, and impress the admissions committee.

Dartmouth also does not require an absolute SAT score requirement, you need to score at least 1450 to have a higher chance of being a Dartmouth student. On the other hand, the school’s average ACT score is 34. This means that you may have a hard time getting in if you score 32 or below.

Other supplements are required for admissions aside from the Common Application. On top of two teacher recommendations, applicants should provide a peer recommendation from their more eloquent friends.

Dartmouth believes the best way to learn how a candidate might interact in their community is by asking their peers.

After being accepted, students are offered one of the most comprehensive financial aid packages in the entire Ivy League. Almost half of the students can apply for need-based scholarships at Dartmouth.

Recently, the school announced enhancements to augment its financial aid program and help more students. The latest initiative gives free tuition to students coming from families with annual incomes under the $75,000 bracket. Dartmouth assures need-blind admission for each of its students.

Dartmouth College is nestled in the rural town of Hanover, New Hampshire. It can be found in the Upper Valley along the Connecticut River in New England. The campus is at the center of a 5-acre “Green,” which used to be a field of pine trees before it got cleared in 1771. It is known as the largest landowner in the private sector of Hanover. The total landholdings and facilities of Dartmouth are estimated to be worth $434 million.

The campus is not the only major property under Dartmouth’s ownership. The institution also owns 4,500 acres of Mount Moosilauke in the White Mountains, along with a 27,000-acre tract of land in northern New Hampshire referred to as the Second College Grant.

Dartmouth has three professional schools, namely: the Dartmouth Medical School, The Amos Tuck School of Business Administration, and the Thayer School of Engineering. The college offers 25 other graduate programs in the realm of arts and sciences.

Despite all of that, the college takes pride in what appears to be an almost singular focus on its undergraduate students. Instead of having graduate students, the school prefers its classes to be solely taught by professors. This is one of the reasons why the college always ranks high when it comes to the quality of teaching, and the level of faculty-student interaction. 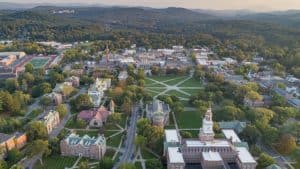 Dartmouth students do not usually join a fraternity, sorority, or coed until they reach sophomore year. But those who join form close relationships with the members of the said organizations. The merits of the single-sex Greek system at Dartmouth remain heavily debated on the college. However, as of now, the setup seems to be here to stay.

Students who are not much into the Greek scene may still enjoy other social opportunities. The college frequently sponsors concerts, comedy clubs, and so on. There’s also a so-called “casino night,” which is popular with the school’s high rollers.

Right outside the campus walls is the charming town of Hanover. There, students can find interesting establishments such as affordable restaurants and a good movie theater. 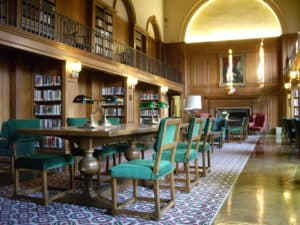 Over 75% of the campus population is part of intramural sports programs or the intercollegiate, club. The athletic center has modern facilities that include an indoor track, ballet studio, and gym area. There are also two pools, squash and racquetball courts, a new recreational fitness center, and basketball courts, perfect for recruited athletes.

Outside are the school’s football stadium, an outdoor track, and tennis courts. Just 20 minutes from the campus is Dartmouth’s own skiway in Lyme. During the winter, buses go to and from the area six days a week for students and other members of the college community.

Listed below are the famous personalities who graduated from Dartmouth College: