The University of Pennsylvania, also known as UPenn or Penn, is a private research university in Philadelphia, Pennsylvania. A part of the Ivy League group of schools, the university was founded in 1740. It belongs to the nine colonial colleges established before the U.S. Declaration of Independence.

Founded by Benjamin Franklin, Penn advocated an educational program in which leaders are trained in commerce, government, and public service. This method of training can be likened to a modern liberal arts curriculum. Penn should not be confused with Penn State, a land-grant public university in the same state. 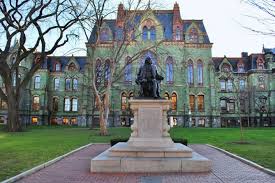 Penn has an acceptance rate of 7.7%. Although the university’s acceptance rate is slightly higher than Yale, Princeton, and Harvard, it is considered a highly selective institution.

Students who want to apply may use the Common Application, Coalition Application, or Questbridge Application. There is an Early Decision program that increases chances for aspiring students who are sure that Penn is their top choice university.

All applicants for the University of Pennsylvania are required to submit either SAT or ACT scores. Out of all admitted students during the 2017-2018 admissions cycle, 54% submitted SAT scores. Ranked among the 20 most selective US universities, Penn has a highly competitive admissions pool. It’s also known for having high average SAT/ACT scores and a low acceptance rate. Despite that, Penn adheres to a holistic admissions process that involves different factors outside test scores and grades. 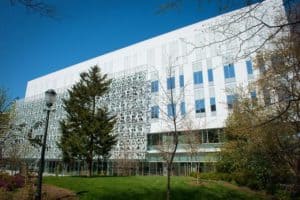 Out of all undergraduate students accepted for admission to the Class of 2018, 52% were Asian, Hispanic, African-American or Native American. Based on gender, 53% of Penn’s current students are women.

Meanwhile, 12% of the Class of 2018 undergraduates were international students. The composition of international students who were part of the Class of 2018 is the following: 43% from Asia; 15% from Africa and the Middle East; 20% from Europe; 15% from Canada and Mexico; 5% from the Caribbean, Central America, and South America; 3% from Australia and the Pacific Islands. 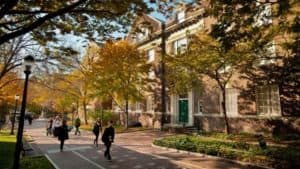 The admissions process at Penn is need-blind, similar to all Ivy League schools. This applies to U.S. citizens, permanent residents, Mexicans, and Canadians. Need-blind means the admissions decision is made without taking into account the students’ capacity to pay for their education.

Penn has no athletic or merit-based awards and the financial aid package is fully need-based. The school is dedicated to fulfilling 100% of demonstrated need, which is calculated through multiple financial forms. It is also unique to every student’s current situation. Around 60% of undergraduates at Penn receive some form of financial aid.

The University of Pennsylvania is located at 3451 Walnut St, Philadelphia, PA 19104, USA. From the school’s West Philadelphia building, Center City can be easily reached across the Schuylkill River. The campus and its urban setting are major parts of student attraction to Penn. While the campus stands in visual contrast from the rest of the city, Penn is neither detached from Philadelphia nor uninvolved in its community.

The university strongly prioritizes research and interdisciplinary learning. Double Degree programs are available, along with unique majors that allow for greater academic flexibility. Penn adopts a “One University” policy that enables undergraduates to access all of the undergraduate and graduate schools. The only institutions not part of this policy are the veterinary, dental, and medical schools.

Penn undergraduates have the option to take courses at Bryn Mawr, Haverford, and Swarthmore as well. This is conducted under a reciprocal agreement called the Quaker Consortium. More than fifty majors are offered in the college.

Because of its setting and opportunities offered, the university ensures that each student will find their niche. Penn provides lots of support for students. They even make an effort to acclimate freshmen to their new environment. New students are assigned academic, faculty, and peer advisors from their own undergraduate department. These mentors give assistance when it comes to planning out future semesters and selecting courses. They also serve as a guide for students throughout his or her academic career path.

The school’s official athletic teams are called the Penn Quakers. The University of Pennsylvania is currently sponsoring 33 varsity sports—rugby, rowing, football, cricket, and basketball to name a few. The school’s teams, which are also referred to as The Red & Blue, has four NCAA national championships under their belt: three in men’s fencing and one in women’s fencing.

The Quakers belong to the NCAA’s Ivy League and Division I (Division I FCS for football). Over the past few decades, the teams often have been football league champions, having won 14 times (1982-2010). They’ve also bagged championships in basketball 22 times (1970 to 2006). Penn’s cricket team was its first-ever athletic team.

Below are the most well-known graduates of Penn: