Columbia University is an independent, non-sectarian institution of higher education. Founded in 1754, it is a private Ivy League school located in the city of New York. The school, established on the grounds of Trinity Church in Manhattan, serves as the oldest university in the state. It’s also the fifth-oldest institution of higher learning in the entire country.

Columbia belongs to the nine colonial colleges founded before the Declaration of Independence. Seven of these schools are part of the prestigious Ivy League group as well. Officially known as Columbia University in the City of New York, it has been ranked as among the top ten universities in the world. 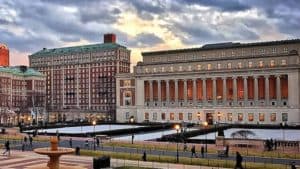 For the most recent Columbia admission cycle, Columbia University recorded an acceptance rate of 5.3%. This makes the school’s admissions process highly competitive. It currently stands behind Stanford and Harvard and is recognized as the top 2 most selective college in the Ivy League. Admission statistics also show that Columbia acceptance rate for female college admission is at 5%, and 6% admission rate for males.

With Columbia University’s overall acceptance rate, you need to focus on their average GPA, SAT score, and ACT score. Whether you apply early decision or regular decision, you must meet the admission requirements to have a higher chance of getting past their first round of filters for prospective students.

An applicant must take either the SAT or ACT tests in order to submit and application to Columbia University. The university is extremely competitive for SAT test scores. The average SAT score composite is 1505 out of 1600.

On the other hand, the average ACT score for Columbia University is 34. Even though the university says they do not have a minimum ACT test score requirement, being on the average or above should still give you a better chance at getting a positive admission decision.

Every student like you who wants to get into Columbia University may already know that you need average GPA, SAT and ACT scores or higher. If you want to have a higher chance of entering class in the university, you can include an extracurricular activity. You may include areas where you excel the most or something that will emphasize your dedication to a certain field.

According to 2019 data, Columbia University undergraduates had tuition and fees amounting to $59,430 while the graduates had $48,390. 4,916 students or 59.83% of the enrolled undergraduate students have been rewarded financial aid in the form of grants or scholarships with an average amount of $41,752.

Columbia University offers need-based aid which makes it possible for students and their families to afford a Columbia education. The admitted student’s family’s financial circumstances will be reviewed by the institution to determine their financial need. The university will award the financial aid to the family to meet their full demonstrated financial need.

Financial aid enhancements were implemented by the school for all incoming and continuing students. Loans for all students were eliminated and were replaced with University grants, families with less than $60,000 income are no longer expected to contribute income or assets to tuition and other expenses (reduced parent contribution), and students are also given opportunity to apply for additional funding if they want to study abroad, research, internships, and community service opportunities.

Columbia University is recognized as the second-largest landowner in New York City, coming in after the Catholic Church. The main campus takes up over six city blocks or 32 acres. It’s in Morningside Heights, New York City, a neighborhood with several academic institutions within it. More than 7,800 apartments are under the school’s ownership in Morningside Heights. These buildings house staff, faculty, and graduate students.

The university also has an extensive tunnel system more than a century old. Its oldest areas even predate the existing campus. While some of these parts are still open to the public, others have been cordoned off.

Columbia University offers 465 degree programs for all students. These include Bachelor’s, Master’s, Doctorate, and Post-Graduate Certificate programs. Out of those programs, 18 can be taken through distance learning.

A complete list of the majors, concentrations, and programs of study offered by the university can be viewed here .

Columbia University has a vibrant student life. The school is home to various fraternities, sororities, and co-educational Greek organizations. 10-15% of undergraduate students belong to these groups.

The university also houses two pioneers in undergraduate campus radio broadcasting: WKCR-FM and CTV. For those interested in debate and model UN groups, Columbia has its Philolexian Society. This literary and debating club was established in 1802 and is known for being the oldest Columbia student group. It is also the third-oldest US collegiate literary society.

Facilitating the school’s Model United Nations activities is the Columbia International Relations Council and Association (CIRCA).

In terms of publication, The Columbia Daily Spectator is the second-oldest student newspaper in the United States. The Blue and White is another well-known literary magazine founded in 1890. Published monthly, it tackles campus life and local politics in print.

For aspiring entrepreneurs, the school offers the Columbia University Organization of Rising Entrepreneurs (CORE). Introduced in 1999, this group aims to foster entrepreneurship on campus.

On the athletic front, Columbia is a member of the National Collegiate Athletic Association (NCAA) in Division I FCS. The school fields 29 varsity teams. For football, the Columbia Lions play home games in the Robert K. Kraft Field at Lawrence A. Wien Stadium that seats 17,000.

As one of the top universities in the country, Columbia has produced many notable personalities. Below are some of them: