Harvard University is a private Ivy League school located in Cambridge, Massachusetts. Founded in 1636, it is the oldest institution of higher learning in the United States. The school is named after its first benefactor: John Harvard. It is the most selective university in the nation, and it often tops the rankings of the best national universities. Harvard is also the nation’s wealthiest school with an endowment reaching $37 billion.

Because of its wealth, academic reputation, influence, and rich history, Harvard is one of the most prestigious universities in the world. 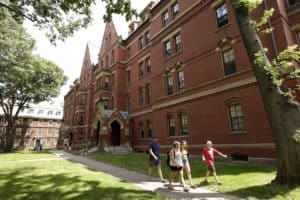 Harvard University has an acceptance rate of 4.6% based on admissions statistics, making it an exceptionally selective school. Admission depends on several factors such as personal qualities, academic prowess, and extracurricular activities.

In the past few years, this Ivy League university has a low acceptance rate where only 7-10% from the applicant pool were admitted even though more than 85% of them were academically qualified. for undergraduate admission, Harvard attracts many of the best students around the globe. Most of these accepted students rank in the top 10-15% of their respective graduating classes.

Harvard does not have its own institutional form. Students may apply through the Common Application and the Universal Application. The Common Application is a straightforward process: students write an essay topic of their choice, provide their biographical details, send a transcript, and submit a summary of their extracurricular life. Applicants are also required to request recommendations from two teachers and a counselor.

There’s no single formula through which a student is admitted into a Harvard class. Each application is reviewed by an admissions officer with great care. Their goal is to identify and admit exemplary students who will likely make an impact not only during their college years but also beyond.

Out of the 10,086, the ivy league university only accepted 747 or 7.41% of the Harvard Class of 2025 for early admission. The admission rate for early applicants increased by roughly 57% while the acceptance rate decreased by 6.5%.

This Ivy League college accepted 1,980 or 4.92% of applicants for Class 2024 college admission. The rate of admission for Harvard Class increased from 4.50% for the combined SCEA and regular decision.

Students in Harvard mirror a diverse range of perspectives, interests, and backgrounds. All 50 states of the United States are well-represented. There are also students from over 70 foreign countries. Almost 70% of the student body are graduates of public high schools.

Based on Harvard University’s report, there are a total of 7,274 international students on campus and reports that the percentage of Asian American students increased from 17% to 21% in a decade.

The college has been entirely coeducational since 1977. At the time, Harvard joined forces with Radcliffe in a unique partnership. The Harvard community takes pride in its student body that hair from different ethnic, socioeconomic, and religious backgrounds.

The average GPA of high school students accepted to Harvard University was 4.04 which indicates that you need to be at the top of your class to have a chance of being a Harvard student. Based on admissions statistics, 95% of the school’s freshmen were in the top 10% of their high school graduating class. If you have a lower GPA than average, then you need to have a higher SAT or ACT score to compensate and be able to compete with other applicants who have a higher average GPA than you.

Each school, even elite colleges, have different admission requirements, especially when it comes to test score. For Harvard, the average SAT score is 1520. The university has the Score Choice policy of “Highest Section,” which is also known as “Superscoring.” This simply means that you can choose which SAT test score you want to submit to the school and the admissions officer will consider your highest section scores.

On the other hand, the average ACT score for Harvard is 34. And although this league university says that they have no minimum ACT test score requirement, it would be best to have an average or higher test score to have higher chances of being considered for college admission for the current academic year.

If you are concerned that your SAT score is not high enough, we have a number of ways to help you prepare for the SAT.

For Harvard University, the deadline for Restrictive Early Action admission is November 1 while the application deadline for regular decision is January 1.

The undergraduate tuition and fees of Harvard University in 2019 amounted to $50,420. For graduate school, tuition and fees are $47,562. 4,311 students or 43.33% of the enrolled undergraduates have received financial assistance in the form of scholarships or grants that approximately amount to $47,145.

Harvard adheres to a need-blind admissions process. This means an applicant will be evaluated without regard for the family’s capacity to pay. Around 70% of students in the university are given financial aid. A qualified admitted student receives an average financial package that comes with a grant, loan, and campus job was around $40,000 in recent years.

Harvard is a culturally-rich university. It has historic buildings and various state-of-the-art research facilities. Due to its Cambridge location, the school allows students easy access to downtown Boston. It’s also close to hundreds of interesting establishments. 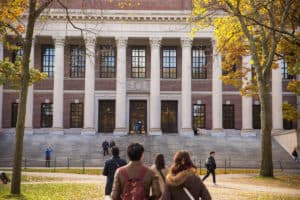 Students can take up a vast array of academic resources and offerings. Those who are taking up their A.B. or S.B. can select from about 3,500 classes each year and more than 40 fields of concentration/majors. Throughout eight semesters, students need to pass 32 semester-long courses as a requirement for graduation.

The concentration includes almost half of the course load divided over the four years. Examples of fields students can major in are biological sciences, literature, folklore and mythology, computer science, linguistics, economics, history, and engineering. Some students take up joint concentrations or create their own.

The Harvard community is known for its interest in relaxing and socializing. But because most students are involved in two to three extracurriculars, they tend to have a busy schedule. All told, the school has more than 400 official student organizations on campus. These groups include a marching band, five orchestras, two jazz bands, a gospel choir, and a glee club.

There are also a daily and a weekly newspaper, dozens of political and literary publications, a student government, more than 60 theater productions annually, debate teams, religious groups, and minority and other organizations focused on public service. 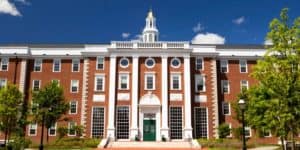 They have also won NCAA Division I championships in women’s lacrosse, men’s and women’s hockey, crew, and squash.

One of the highlights of the school year on the athletic front is the Harvard-Yale football game. Harvard’s long-time athletic rivalry with Yale is intense in every sport where they play against each other. This competition comes to a climax in the fall during the annual football meeting. Dating back to 1876, this momentous event is often dubbed as “The Game.”

Below is a list of the most famous Harvard University graduates: