Princeton University is a private research university in Princeton, New Jersey. Established in 1746, it is home to a diverse, dynamic community of intellectuals who pursue their passions with unmatched fervor. The Ivy League school is a well-known, major research institution. As a liberal arts college, it’s one of the most respected learning centers around the globe.

To help improve admissions chances for those who are sure the university is their top choice, there is a single-choice early action plan. The overall acceptance rate is believed to be doubled for early decision applicants. An early decision applicant can demonstrate his interest in joining Princeton. The school also considers legacy status in the process of application review for college admission.

Princeton University’s admission statistics show that 5.55% or 1,823 students out of the 32,836 from the applicant pool were accepted to the Class of 2024. The elite school received over 5,000 applications, and only accepted 791 students for early admission.

Improve your chances of getting accepted to Princeton with SAT prep: https://caddellprep.com/sat-test-prep/

Princeton has made major strides in terms of expanding the diversity of its student body these past few years. The most diverse batch in the school’s history is the 2016 freshman class, with more than 43% of students identifying themselves as students of color.

Based on gender diversity for the 2018-2019 academic year, the undergraduate and Master’s students were 51% male and 49% female. 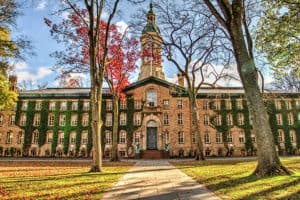 Princeton has an average GPA of 3.9 which means that you need to be at the top of your graduating class in order to have a higher chance of being considered for undergraduate admission. If your GPA falls below the average, you will need to get higher SAT and ACT test scores to compensate and compete with other applicants who have higher average GPA than you.

The average SAT score composite at Princeton is 1505 while the ACT score is 32. Princeton requires their applicants to take the SAT Essay/ACT Writing Section. The results will be used as another factor for admissions decision and consideration.

For the 2019 school year, the undergraduate tuition and fees of Princeton University amounted to $50,340. Those in the graduate school had tuition and fees amounting to $51,250. 3,194 students or 58.84% of the enrolled undergraduate students have been given financial aid in the form of grants or scholarships. The aid amounted to an average of $50,655.

Princeton provides one of the best financial aid programs in the United States. Talented students from all economic backgrounds are given a chance to access high-quality education. Admission to Princeton is need-blind. The school promises to reach 100% of every admitted student’s financial need.

The financial aid package is approximately $33,450. On average, this covers 96% of tuition and 56% of the class of 2012 received some type of financial aid. The usual package includes a self-help component that includes student employment and grant aid. It also comes with a summer savings requirement, which can be subsidized if the student cannot earn the full amount.

The university is known for providing a groundbreaking no-loan policy. First introduced in 2001, this program replaced loans with grants that never have to be paid back. Because of this, recent graduates can pursue any passion they have without dealing with the burden of debt.

Princeton is often referred to as the “Orange Bubble.” Students believe it’s easy to forget the outside world once you set foot into the 500-acre Gothic campus. Since university housing is guaranteed for all four years, a huge part of the student body stays and lives on campus.

Once students venture out of the FitzRandolph Gate, they can freely explore the township of Princeton. The location is just an hour south of New York City and an hour north of Philadelphia. The elegant, charming town offers several restaurants and small businesses that cater to returning alums and day-trippers. 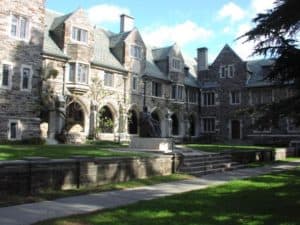 Undergraduate and graduate education are available in the humanities, social sciences, natural sciences, and engineering. Students may take up professional degrees through the Woodrow Wilson School of Public and International Affairs, the School of Engineering and Applied Science, the School of Architecture, and the Bendheim Center for Finance.

Undergraduate students have general education requirements. They select from a wide range of elective courses and pursue departmental concentrations and interdisciplinary certificate programs.

Undergraduate education at Princeton requires independent work. Students who graduate are granted either a Bachelor of Arts (A.B.) or a Bachelor of Science in Engineering (B.S.E.).

Princeton guarantees housing to all undergraduates for four years. Over 98% of students live on campus in dormitories. Freshmen and sophomores are required to stay in residential colleges, while juniors and seniors reside in dormitories specially designated for them.

75% of upperclassmen take their meals in eating clubs that line up Prospect Avenue. The eating club system is something unique to Princeton and has been around for over a century. Every club is headquartered in a stately mansion, which also serves as a hangout and dining hall for more than a hundred upper-class members.

Two Model United Nations conferences are held in Princeton. For high school students, PMUNC is held in the fall. Meanwhile, PDI is held in the spring for college students. 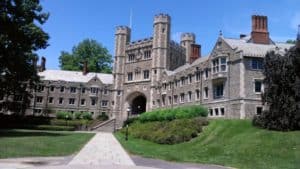 The school’s official team name is the Princeton Tigers. They uphold a tradition of excellence in the Ivy League. As a result, the Princeton campus is known for having an exceedingly active athletic life. Nearly 45% of undergraduates take part in intercollegiate sports, 20 for men and 18 for women. Teams in the university that are particularly strong include those playing basketball, lacrosse, squash, and field hockey.

Many students also focus on at least one of the school’s 35 club sports. This includes Ultimate Frisbee, ballroom dancing, and rugby. Those who are not athletically inclined are often cheering on their athletic friends from the stands or diligently working out in the open Dillon Gym.

Below is a list of the most well-known people who graduated from Princeton University: