In this video, we will be learning how to solve linear inequalities. After you finish this lesson, view all of our Algebra 1 lessons and practice problems.

First we split the inequalities:

First we split the inequalities:

In this lesson, we’ll go over solving linear inequalities.

This is very similar to solving linear equations except for one thing:

If we multiply or divide by a negative number, we must flip the inequality sign.

could be flipped the other way and become this

Let’s look at an example:

From here we have to divide by

And we end up with

This is our answer.

So if we need to graph it, let’s draw a number line and draw an open circle at

is not equal to

. Then make an arrow going to the left.

Again, we’re going to treat it as a regular equation when solving

First thing we have to do is to get rid of

Then let’s solve for

And because we’re dividing by 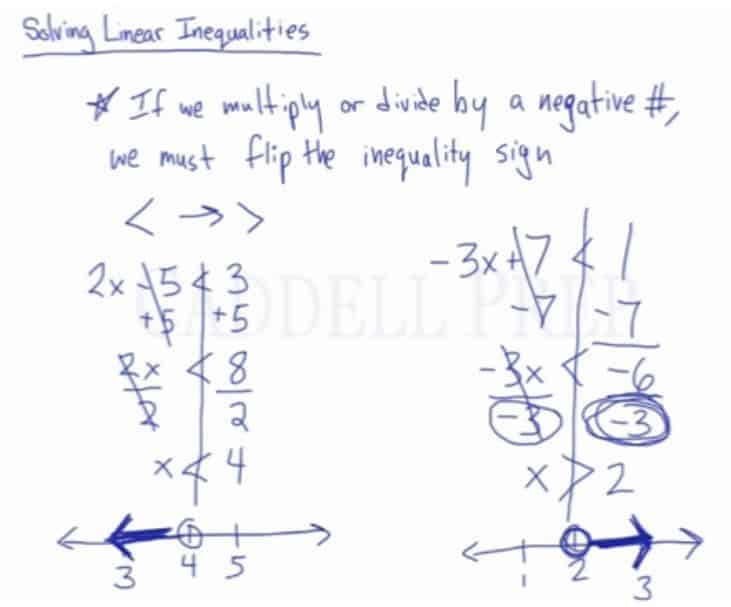 Remember, when we divide by a negative number, we always have to flip the sign.

It doesn’t matter if the dividend is positive or negative. All we care about is when the divisor is negative, that’s the time we flip the sign.

If we graph the answer, let’s draw a number line.

Draw an open circle at number

. It’s not a filled circle because it is not equal to.

is greater, draw a line going to the right.

Again, solving inequalities is very similar to solving regular equations except if we multiply or divide by a negative number we have to flip the sign.

or an explicit solution for

. It’s going to be a range of numbers.

is equal to a number.

is any number less than or greater than a number. All the way up to infinity.

Here we have a more complicated inequality.

We have two different conditions.

What we should do is separate this into two different inequalities.

Let’s solve the inequality on the left first.

Now, let’s solve the other inequality.

, we have to draw an open circle at number

. Open circle because it is not equal to. And since it’s greater than, draw a line going to the right.

, so let’s draw a shaded circle at

since it’s also equal to it. Then draw a line going to the left.

Further, draw a line to the other circle.

Our answer can also be written as:

Notice that the two endpoints are the end numbers as well –

Let’s have another complex inequality.

Let’s break this down into two simple inequalities.

Let’s work on the first inequality by adding

, divide both sides by

Now, let’s solve the other inequality.

Let’s start off by adding

, we’ll divide both sides by

So, now we graph this by drawing a number line.

Draw an open circle at

since it’s not equal to. Then draw a line going to the right since

Next, draw a shaded circle at

could equal to it. Then draw a line going to the left since

The two arrows are pointing in different directions.

Now, we can write our solution as

won’t be able to satisfy both, so we write “or”.