In this video, we will be learning how to solve compound inequalities. After you finish this lesson, view all of our Algebra 1 lessons and practice problems.

“And” inequalities are drawn toward one another

“Or” inequalities are drawn away from one another

Compound inequality means we have two inequalities that are associated.

Here we have two constraints for the value of

Let’s solve the first one first.

is not just less than

. It should also satisfy the other inequality.

So let’s solve this by first subtracting

which we can also write as an improper fraction

If we graph this, draw a number line with the lowest number at

and the highest number is 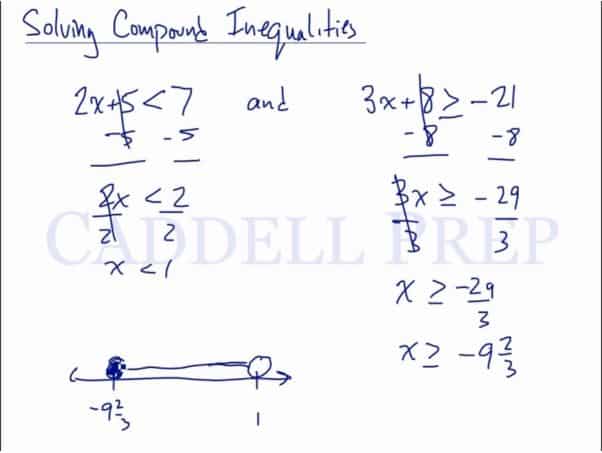 . We also know that

, so let’s draw a solid circle on

then draw a line between the two points.

So our solution can be written as:

Our next example is written as one long inequality.

So we’ll solve this as a whole at once.

Let’s start off with subtracting

from all sides of the inequality.

by dividing the inequality by

and the highest number is

is everything between the two.

to represent the equal sign and an open circle at

. Then draw a line in between.

Let’s have another example

Let’s solve it the same way as above.

So the answer here is

This time our number line starts at

Let’s move on to another type of compound inequality.

We have to solve this individually.

Let’s start with the one on the left.

, divide both sides by

Now let’s solve the other one.

Now our answer is

We draw an open circle at

and draw a line going to the left. Then draw a solid circle at

and a line going to the right.

Notice that the lines we drew are opposite of each other.

Because the inequality we have is an “or”. So the numbers between the two are not the answer.

Our answer satisfies one or the other, not both.