In this video, we will be learning the rules and concepts behind how to add and subtract signed numbers. Signed numbers mean positive and negative numbers. 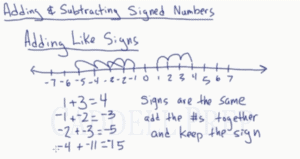 Adding Unlike Signs: Find the difference and keep the sign of the larger number 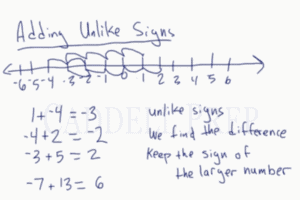 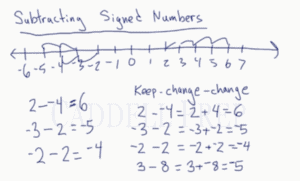 In this lesson, we’re going to discuss how to add and subtract signed numbers. This is adding and subtracting positive and negative numbers.

Now, let’s get to add and subtract signed numbers.

Let’s start with a classic example.

This is the addition of two positive numbers.

In the number line, we end up with

Let’s see if we add negative numbers together.

So, let’s start with

In the number line, we end up with

so we’ll start at

We end up with

in the number line.

Now, let’s make sense out of this.

Since the two numbers have the same sign, we just add them together and keep the negative sign.

But if we do

In the number line, we end up in

So let’s start at

in the number line and add

Let’s see what the pattern is.

When the signs are different, we find the difference between the numbers.

So the difference between

. And it’s negative because the bigger number is negative.

, the difference of the two numbers is

Let’s do another example without the number line.

Here, we find the difference between

. The bigger number is positive so our answer is also positive.

In adding unlike signs, we find the difference and we keep the sign of the larger number.

, in the number line we end up with

Let’s try a different one.

going to the left. Here, we end up with

What if we have

away. In the number line, we get

Let’s say you have

and we took away

That’s a good thing. Maybe you owed someone

and you took it away. You don’t owe someone

anymore. The person said, “forget about it”.

since you don’t have to pay that for.

So we increased to

Next, let’s say you have

because you owe people

Then somehow you spend another

. Maybe you borrowed this amount.

So now, you owe

Here, you’re already negative but spent some more. So you are further negative.

Same thing with the third example.

You can also memorize this formula:

Here, we keep the first number then change the second sign and also change the third sign.

Take a look at this:

Let’s try the next one

Remember the rule for adding like signs? We just have to add the two numbers together and keep the sign.

Let’s do the third example.

Again, we’re going to do keep-change-change.

Keep the first one

Let me show you another example.

This isn’t too bad. Both numbers are postive. But we should expect the answer to be negative since we are subtracting more than what we have.