SUNY Broome Community College, also referred to as SUNY Broome or BCC, is a public community college established in Broome County, New York. The school is part of the State University of New York (SUNY) system.

Since being founded in 1946, BCC has gone through many name changes over the years. The school is situated in the Town of Dickinson, just north of the City of Binghamton, New York. 2010 records show the college has more than 6,000 enrolled students and alumni of over 41,000.

The college aims to set itself apart from other community colleges by offering access to outstanding faculty and state-of-the-art technology. Some of the services offered to help students with their studies include information technology services, a learning assistance center, and the library and learning resources center featuring Wi-Fi access, multiple computer and reference labs, extensive media services, and even iPods available for a student loan. 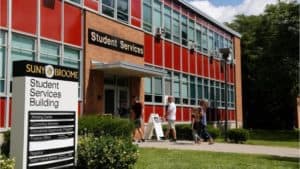 SUNY Broome has a 100% acceptance rate, making it easy for students to gain admission as long as they submit the proper requirements. Some of the most popular majors in the school include Liberal Arts and Humanities, Business, and Nursing. It has a 37% graduation rate and alumni earn a starting salary of $24,500.

A total of 5,624 students have enrolled in SUNY Broome Community College in 2019. All of those students are attending undergraduate degree programs. According to gender, there are 2,481 male students and 3,143 female students.

Unlike similar colleges, SUNY Broome has far lesser students. Approximately 707 students are exclusively enrolled in the school while 1,499 are enrolled in online courses.

New York residents are required to pay the 2019 undergraduate tuition and fees of SUNY Broome Community College amounting to $5,355. For out of state students, the tuition is $10,083. 3,856 students (or 68.56% of the enrolled undergraduate students) have obtained grants or scholarships aid that amounts to an average of $5,920.

Once students have received the financial aid, the net price for SUNY Broome Community College is $14,679 for New Yorkers and $19,407 for out-of-state students. This includes tuition, fees, books, supplies, and living costs.

BCC has one campus on Upper Front Street in Dickinson, New York. While it serves as the main campus,  some classes are taught in Waverly, Owego, and within the City of Binghamton at smaller classroom centers.

Additionally, the school has its own theater in which campus performances of plays and other theatrical activities are hosted. This facility is known to students as the Little Theater.

SUNY Broome Community College offers 72 degree programs through Certificate, Associate’s programs. Out of that number, 11 programs can be taken by online/distance learning.

SUNY Broome’s Student Activities Office offers lots of fun and exciting activities for students. They have a wide range of organizations and clubs that students can join. From the Black Student Union to the Japanese Animation Club, they have clubs that cater to just about everyone.

All BCC clubs and organizations are under the facilitation of The Swarm–the school’s very own student engagement network. Students who want to check existing clubs or start their own organization can visit The Swarm’s official website.

Meanwhile, there is a Student Activities Office that’s in charge of organizing giant events such as Welcome Week, Giving of the Toys, and Spring Fling. The school also brings entertainers such as comedians, bands, hypnotists and so on for small events around campus.

The women’s soccer team were national champions in 2007, 2008, and 2016. Each year since 2014, the SUNY Broome Hornets play the Binghamton University Bearcats in the President’s Cup hockey game.

SUNY Broome has been home to many acclaimed personalities around the world. Graduates of the school have pursued different careers in various fields. Listed below are a few of SUNY Broome’s famous alumni: