Learn how to apply sine, cosine, and tangent (SOHCAHTOA) in right triangles to solve for missing lengths or angles in a right triangle. After you finish this lesson, view all of our Algebra 1 lessons and practice problems.

SOH stands for Sine, Opposite, Hypotenuse and gives us

CAH stands for Cosine, Adjacent, Hypotenuse and gives us

TOA stands for Tangent, Opposite, Adjacent and gives us

What are the opposite, adjacent and hypotenuse in a right triangle?

Note: The opposite side and adjacent side are always in reference to an angle.

Here is an example of how to use SOHCAHTOA:

Since the angle measure given is opposite of the side and the question asks to find the hypotenuse, sin can be used to find the missing length.

Multiple x on both sides

Divide 0.5 on both sides to isolate x

The hypotenuse is 8 units 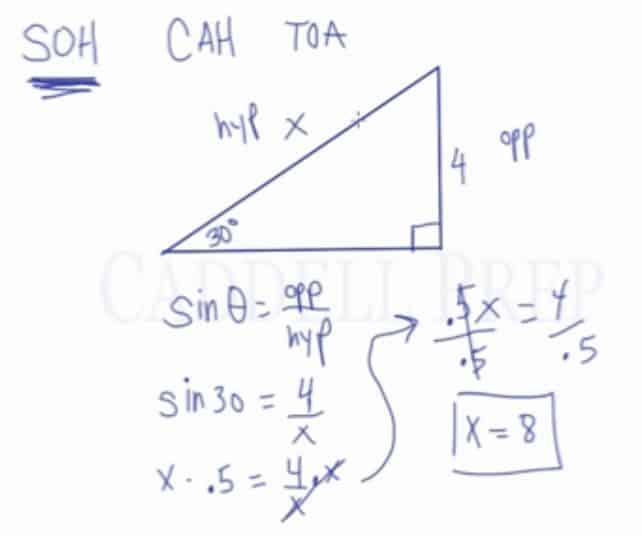 A ramp is pulled out of the back of the truck. There is a

degrees angle between the ramp and the pavement. If the distance from the end of the ramp to the back of the truck is

feet. How long is the ramp?

First, let’s draw a diagram and assign the given values 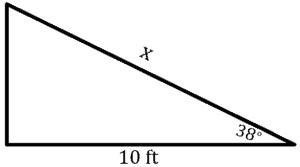 The given is the angle and adjacent side. So, we are going to solve its hypotenuse
Now, let’s solve using Cosine

Therefore, the answer is

A man sees a rocket at an angle of elevation of

degrees. If the man is located at

miles from the rocket launch pad, how high is the rocket? Round the answer to the nearest hundredth.

First, let’s draw a diagram and assign the given values 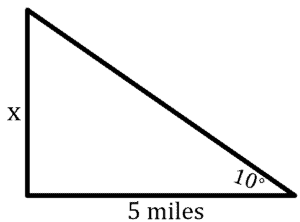 The given is the angle and adjacent side. We are looking for the rocket’s height
Now, let’s solve using Tangent

Therefore, the answer is

In this lesson, we’ll go over basic trigonometry.

So, we’re going to review sine, cosine, and tangent.

If we’re given an angle of one side, we can use one of these trigonometric functions to find the other sides.

I’ll review what side is the opposite and the hypotenuse later.

One way to memorize this is memorize:

T – tangent
O – opposite
A – adjacent

Then let’s define the sides.

The side across from the right angle is the hypotenuse.

And lastly, the side next to theta is called the adjacent side.

Let’s look at this example:

We have a right triangle. One angle is

angle. One side is

. And we’re searching for the hypotenuse.

If we have one side, we can easily use the Pythagorean theorem. But since we are missing the measurement of this side, so we can’t.

Instead, we have to use one of these trigonometric relationships to figure out what the hypotenuse is.

A good place to start is to write our abbreviation.

So we can determine which one we’re going to use.

Now, let’s figure out what sides we have.

is across the angle, so that’s the opposite side.

, which we’re looking for, is right across the right angle. That’s the hypotenuse.

So, we’re going to use SOH.

Since sine has opposite and hypotenuse in it.

This should make sense because

. That means opposite of hypotenuse is

It does make sense at the end.

So in solving for one of the missing sides and we are given an angle and one side, we can usually find the other side by using sine, cosine, or tangent.

First, we just have to identify what sides were given.

And then write the formula and solve.