In this video, we are going to look at how to find a missing side length of a right triangle by using the Pythagorean Theorem. After you finish this lesson, view all of our Pre-Algebra lessons and practice problems.

where a and b are lengths of legs of the right triangle,
and c is the length of the hypotenuse.

For example:
To solve the following equation:

Substitute the variables where 3 replaces a and 4 replaces b

Add the 9 and the 16 together, leaving us with:

So the hypotenuse equals to 5 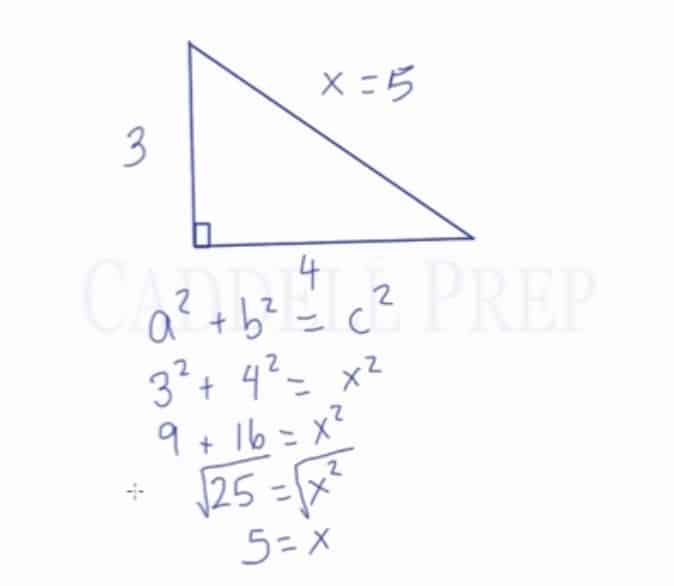 Use the pythagorean theorem equation

Substitute the variables where

together, leaving us with:

So the hypotenuse equals to

Use the pythagorean theorem equation

Substitute the variables where

In this lesson, we’ll discuss the Pythagorean Theorem.

It’s very important to note that Pythagorean theorem is only for right triangles. You can not use this theorem in other types of triangles.

A right triangle has a

Let’s go over some terminologies first.

The side opposite of the right angle is called hypotenuse.

The other two sides are known as legs.

This equation is simply

and the legs are

As for the legs, it doesn’t matter which side you put in as

This equation is called the Pythagorean theorem.

Let’s have an example and put this equation to work.

Here’s a right triangle with a vertical leg measuring

and a horizontal leg measuring

. And the hypotenuse is unknown or

Let’s start off with our equation

Again, as it doesn’t matter which leg is

Let’s just pick the vertical leg to be

and the horizontal leg to be

To solve the value of

, we have to do the inverse operation which is squareroot.

So our hypotenuse is