In this video, we will be learning how to solve for one variable in terms of another in linear equations, such as solving for y in terms of x. After you finish this lesson, view all of our Algebra 1 lessons and practice problems.

Example of Solving a Linear Equation

Multiply both sides by

to isolate x and y

Subtract x from both sides to isolate y 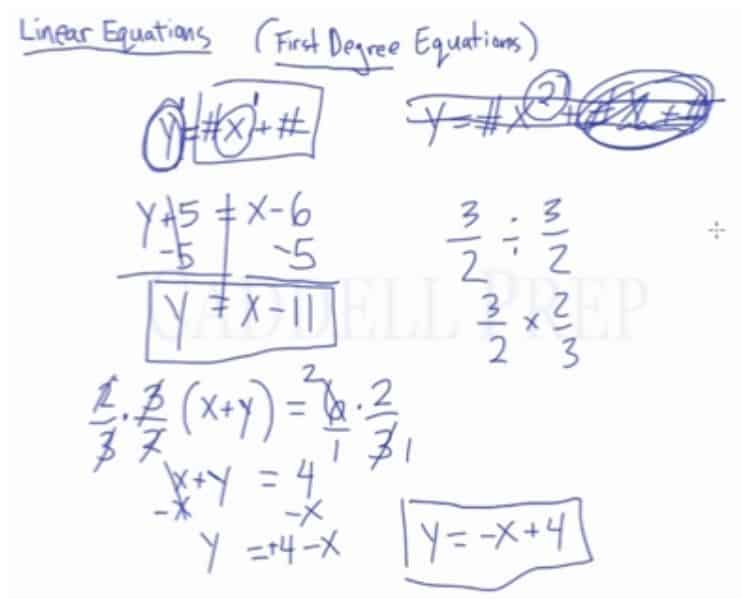 First, we must get rid of

. So, we multiply it by its reciprocal.

to both sides to keep the format

We have to get rid of

to keep the format

So, we multiply it by its reciprocal

The basic format of a linear equation is

The first thing is that we have two variables

A very important reminder about linear equation is why it’s called first-degree equation.

It’s because the exponent for the variables –

So if we have this equation:

The end of the equation doesn’t matter at this point.

As soon as you see an exponent that isn’t 1 it’s not a linear equation.

The exponent has to be one.

So, what we really want to do in a linear equation is to solve for one of the variables.

So what we want is some variable such as

What you need to do is to isolate

So, we have to do inverse operations or reverse PEMDAS to get

Don’t worry about the fact that there’s

here. It’s just a number minus another number. This doesn’t matter.

The only thing that we want to focus on is

from both sides of the equation.

Let’s try another one.

To do this, we just have to multiply it by it’s reciprocal. It cancels out perfectly.

The reason why we multiplied it by its reciprocal is because we want to divide the fraction to cancel it out.

We have to do keep-change-flip. So we have

So by multiplying by reciprocal, I actually am dividing.

Maybe you want to put a denominator to

, so we can cross cancel.

So now we have

This is okay but we want to write