Lehman College is a public college that belongs to the extensive City University of New York (CUNY) system. Originally established in 1931 as the Bronx campus of Hunter College, Lehman became an independent educational institution in 1968.

The New York-based campus was named after Herbert Lehman, a former New York governor, U.S. senator, and philanthropist. The school primarily focuses on liberal arts—offering over 90 undergraduate and graduate degree programs and fields of study. 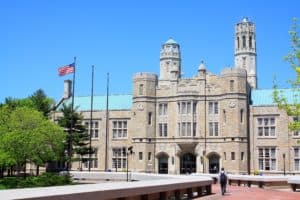 Admissions at Lehman College are competitive, considering the 32% acceptance rate recorded in 2016. Students who wish to apply may do so by accomplishing the CUNY application online. It should be submitted by February 1st of each year to be considered for the Fall term. The criteria for admissions for undergraduate students vary, and each applicant gets screened by the administration individually.

A total of 14,130 students have enrolled in CUNY Lehman College–out of that number, 11,978 students enrolled in undergraduate programs and 2,152 students took part in graduate programs. Based on gender, the school is home to 4,493 male and 9,637 female students. According to race or ethnicity, 1,168 White, 3,805 Black, and 883 Asian students out of total 14,130 are attending Lehman College. This shows the school has a diverse student body.

Based on 2019 statistics, undergraduate tuition and fees of CUNY Lehman College are $7,210 for residents of New York and $14,880 for those out of the state. For the graduate school, tuition and fees cost $11,250 for New Yorkers and $20,400 for those from other areas. 7,587 students or 63.34% of the enrolled undergraduate students have received financial aid in the form of grants or scholarships that take the average amount to $7,737.

Lehman College is located in 250 Bedford Park Blvd W, The Bronx, NY 10468. Spanning 37 acres, the campus is found close to the Park Reservoir. During World War II, Lehman was used as a primary national training ground for women in the military and the temporary headquarters for the United Nations in 1946. It is best known for its rich historical background as well as its Collegiate Gothic and modern architecture that set it apart from other schools.

Lehman’s academics are divided into four main departments: Arts and Humanities, Education, Natural and Social Sciences, and Adult and Continuing Education. Students can choose from numerous undergraduate majors, the most popular fields of study being Social Work, Sociology, Nursing, Business Administration and Accounting.

In addition to the undergraduate courses, the campus also has degrees and programs for graduates. Students have an option to take academic paths leading to a Master of Arts, Master of Fine Arts, Master of Science and other Masters Degrees. There are also advanced studies certificates in subjects such as Literacy Studies and Nursing Administration.

Lehman has a program called the Freshman Year Initiative, which, as the name implies, details a particular curriculum for all year students. Its main objective is the promotion of interdisciplinary education that involves peer support and faculty collaboration. Students are required to take writing and math classes, as well as a Freshman Seminar. This is done with the aim of equipping students for what’s to come in their college journey and establishing a strong liberal arts education foundation.

Each member of the Lehman College student body is encouraged to get involved in the school in any way, whether it’s in the arts, sports, or student government. Those who are athletically-inclined will surely enjoy the school’s state-of-the-art athletic facilities known as the APEX. This center is open to all students for free and includes a swimming pool, athletics arena, aerobics studio, and running track among others.

Students also have an option to take part in a wide array of clubs, organizations, and activities—which range from academic clubs to media groups. Anyone interested in the arts is welcome to display their works in one of the Lehman College galleries or participate in theatrical plays and shows held in the Center for the Performing Arts building.

During the 2012 to 2013 games, the Lightning Bugs took home the CUNYAC Championships in men’s swimming and diving and women’s outdoor track and field. Two All-Americans were produced by Lehman in the outdoor track sport: Tobi Alli (100 m) and Jasmine Springer (Triple Jump).

Some of the most famous people who graduated from Lehman College are: