. The most basic one is

. These functions are parabolas and are “U”-shaped. The point where it stops and changes to the other direction is known as the vertex. The axis of symmetry of the parabola passes through the vertex. After you finish this lesson, view all of our Algebra 1 lessons and practice problems.

A graphing calculator is a helpful tool when it comes to dealing with quadratic functions. After graphing the function, the vertex can sometimes be seen as a point on the table. The axis of symmetry has the equation of the x-coordinate of the vertex. In the function

the table helped us determine that the vertex lies at (-2,-6).
Without a graphing calculator, we can still find this information.
The formula for the axis of symmetry is written as

. When these values are substituted into the formula,

which is simplified to

This means that the vertex lies at the point (-2,-6), which agrees with the same point that we determined from the graphing calculator. 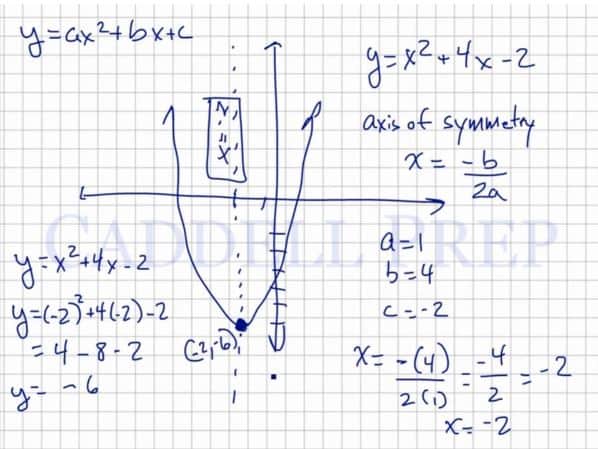 Examples of Properties of Quadratic Functions

Let’s substitute the value of

to the equation to get 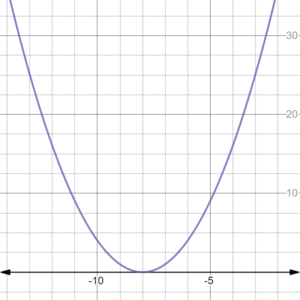 Let’s substitue the value of

to the equation to get 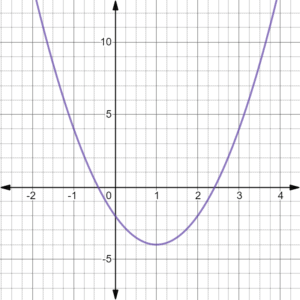 Quadratic functions have this form:

and the more basic for is:

-axis. It can be anywhere in the graph or upside down.

If you look at the line, it starts from the top then goes down and stops at a point then back up again.

The point where it stops and turns the other direction is called a vertex.

Also, the axis of symmetry is through the vertex.

What about when the vertex is not on a particular tick mark?

But of course, there’s a way to solve it algebraically.

Before we get to solving it algebraically, let’s do it first on a calculator.

Let’s look at the graphing calculator.

It goes down then stops and goes back up again.

There’s the vertex – where it goes up and down on the axis of symmetry where it’s a reflector of the other side.

The calculator already identified the values for us.

According to the calculator, the vertex is

Remember that the basic format for quadratic functions is

So given that our line is

Now, how do we find the vertex?

The vertex is a point on the graph.

So we could use the function to find out this point.

At this point, we know what is the value of

. So how do we find out the value of

Let’s use the function and substitute the value of