In this video, we are going to graph square root functions.

The graphing calculator is a very important tool in order to graph square root functions. Without a calculator, simply find the square of each number and plot the points on a coordinate plane. Connect the points and make sure to put an arrow since the graph continues on. Keep in mind that the square root of negative numbers does not exist. 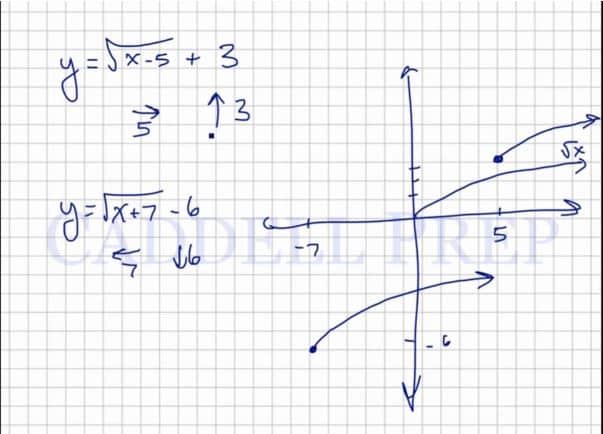 Let’s go over how to graph square root functions.

We’ll start with the most basic one.

Let’s look at this:

, we cannot have a square root of

doesn’t exist. It is imaginary.

then there is no value for

Let’s just pick numbers that we can do a square root of.

It will look like this. It will level off but not entirely.

The graph wouldn’t exist on the other side. Because the square root of negative numbers doesn’t exist.

So, this is the basic shape of a square root function.

You have to remember that when you add something to a function, the line will go up by that number of spaces.

In this case, it will go up three spaces.

And if you subtract something from

, we will move to the right by that number.

So in our example, we’ll go to the right by

If we have this function:

this one’s going to move to the left by

spaces and down by

The line will move in the direction we have but will still follow the same curve as the basic function.

So, if you add or subtract something to the

When you add to the

, it moves to the left. Then if you subtract, it will move to the right.

And if you add at the end, the line will go up. If you subtract at the end, it will go down.