Many students are faced with having to take the TACHS and SHSAT in 8th grade. It can seem daunting to students, but it isn’t as bad as it may seem. Some of the material is covered on both tests (reading comprehension and math). Both tests also test grammar, but the TACHS test includes spelling and capitalization, while the SHSAT doesn’t. It’s also worth noting that the TACHS has an ability section, but nothing similar to that is on the SHSAT. 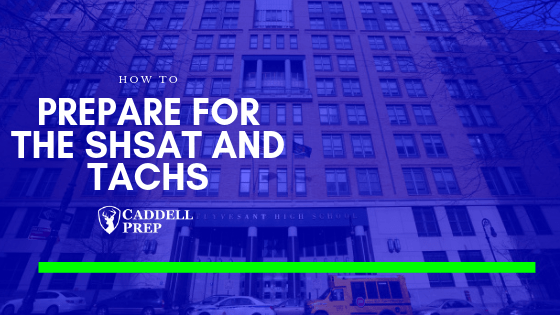 If you plan on taking the SHSAT and TACHS test, I advise that you dedicate a lot of time towards preparing for the SHSAT.

There are a number of reasons.

First of all, SHSAT is a much more difficult test. That’s good though. Because if you’re preparing for SHSAT and you’re really focused on Math questions and reading questions for SHSAT, it’s going to be carried over for TACHS preparation. So, since the readings will be easier and the math questions are easier, by preparing for the SHSAT you’ll be more than prepared for the TACHS test.

There is some difference though. For example, the SHSAT has a section called “revising and editing” that’s based on writing skills. Then the TACHS test has a language section which is based on grammar. They don’t exactly match up. For example, TACHS test will test you on spelling while SHSAT won’t.

So, it’s important to study those two differences.

The other thing is that the TACHS test has an ability. There’s an entire section on ability. Nothing like that exists on the SHSAT.

It’s also worth noting that typically the TACHS test is administered two weeks after the SHSAT.