This lesson is how to write a function rule. This video shows how functions typically behave, and how to write them down. Functions usually have a variable with a coefficient in front that represents the rate of change and has a constant value that represents the starting point of the function. After you finish this lesson, view all of our Algebra 1 lessons and practice problems.

Where # represents a constant

the constant rate of change

Examples of Writing a Function Rule

Jason goes to an amusement park where he pays

per ride. What is the function of the cost?

times the number of rides plus

. This can be written as a function:

and a connection fee of

per hour. Represent her monthly cost as a function of connection time.

The cost has two parts: the one-time fee of

and the per-hour charge of

. So the total cost is the charge per hour

the number of hours

We’re going to cover how to write a function rule for particularly linear functions.

Linear function has a basic form:

represents the constant rate of change

We have a cellphone plan that requests

per month. What is the function of the cost?

It will be cost equals

multiplied by the months. 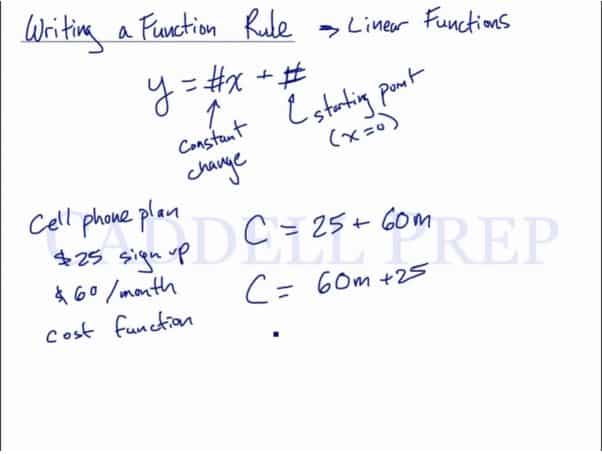 in it. Every week,

is added to it. Write a function to represent the amount of money (m) in the bank account after (w) weeks.

The money will be equal to starting amount plus the amount you add to it times the number of weeks that passed.

weeks, the amount of money you have is computed as:

Now, let’s see how much money you make after

Here, our function can be rewritten as

which follows the basic linear equation form of