Admission to the High School of American Studies at Lehman College (HSAS) is solely based on a competitive examination referred to as the Specialized High Schools Admissions Test (SHSAT). This exam can be taken by all eighth and ninth grade students residing in New York City. All applicants need to be residents of the city for them to be allowed to take the exam.

The High School of American Studies and other specialized schools are strictly forbidden from distributing applications. The only way for middle school students to register is by obtaining applications from their current school’s guidance counselor. 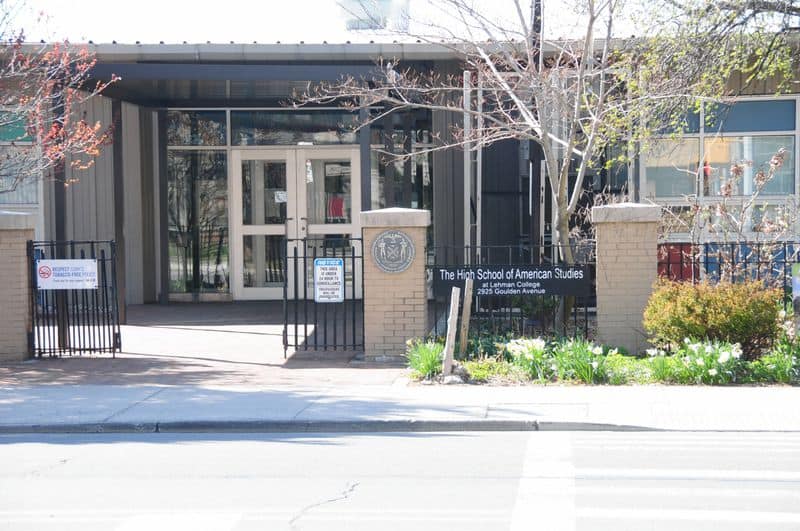 HSAS was designed as a small educational institution for approximately 400 students. Unlike the other specialized schools, American Studies puts a lot of emphasis on history–American History in particular. All students are required to study US History for 3 years and take the AP US History Exam in May of the third year.

Although the school mainly focuses on history, there is a wide range of AP classes in other subject areas like Calculus. During their sophomore year, students are required to have an AP World History class. Those who excel in math can take college-level math courses at Lehman College once they are in their senior year.

HSAS guides its incoming freshmen by offering lots of support to help them adjust to the complex curriculum. One of the things taught to HSAS freshmen is taking structured notes during history classes. This ensures that they can keep track of everything learned in class and through homework.

Aside from a class dedicated to grammar, ninth-graders also take part in a research class facilitated by both a Lehman College librarian and HSAS faculty member.

For juniors and seniors taking their first course at Lehman, they are assigned to join a recitation class supervised by an HSAS teacher. During this study period, an HSAS teacher is responsible for keeping tabs on every student’s completion of assignments and total college course performance. All other teachers then provide help right after school to better guide the students.

Earlier this year, state education officials recognized the High School of American Studies at Lehman College and 276 other New York City schools among the highest achieving in the entire state under new standards of accountability.

Out of those schools, 241 are district schools and the rest are charters. Officials marked the schools are “top-performing” under the federal K-12 education law known as Every Student Succeeds Act (ESSA). 562 schools in total were recognized across the New York State.

2019 marks the first year that New York has used ESSA to measure progress within schools. This gives the state more freedom when it comes to figuring out how to improve schools.

The list of schools released in June exceeded standards in the previous school year. This made them among the state’s highest fliers on one or more of the metrics that include graduation rate, student growth, and academic performance.

According to officials, they also took into account whether a school exceeded or met measures of progress for civic readiness, career, college, rate of chronic absenteeism, English language arts, and math. They also noted that at least 95 percent of students who belong in these schools must have taken state math or reading exam rather than opt-out of New York testing following the federal law.

In the 2017-2018 school year, a different accountability system was used and only 82 schools in New York City made it to the top achievers’ list. This is just below a third of the number recognized in 2019. The jump this year implies the new framework could be getting more schools to join the rank as top-performing.

While department officials claim the two methodologies should not be directly compared, they pointed out that a large number of top-achieving New York City schools recognized last year were also on the list for this year.

“The teachers and administrators at these Recognition Schools have taken to heart the critical mission of educating the whole child,” said Board of Regents Chancellor Betty A. Rosa in a press release. “Our priority is fostering equity for our children across New York. These schools serve as models of the levels of performance we seek for all schools to be able to achieve in the future.”