The graphical way to find the point of intersection is to graph the equations by first writing the slope and y-intercept of each line. ( the “m” value and the “b” value. )
The slope is another way of measuring rise over run or the ratio of distances from each point on the line. Start plotting points from each line’s y-intercept, and then plot the point from there using the slope of the line.
When you do this for each line, you get a point of intersection where the coordinates of that point are identical on both lines.
Another way to find the point of intersection is by making a table for the x and y values, and finding the coordinates by plugging each x value into the line equation for both lines.
An example:

So now you find the two identical coordinates from the two tables, and that coordinate would be your point of intersection. 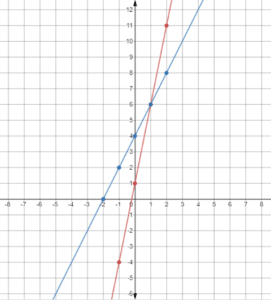 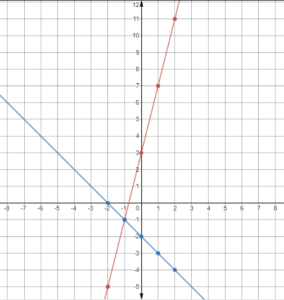 In this lesson, we will discuss how to solve a system of equations graphically.

A system of equations is two or more equations.

And to solve it, we have to have the value of

. In order to do that, we have to work on the two given equations. Remember, not just one but both of the equations at the same time.

We’re going to solve the system of equation by using the graph. We will plot the points of the given equations. We will graph them and find the intersection of these two equations.

The intersection of the two equations represents the

Just a review, the formula for slope is

Let’s graph this by starting at

Then we move to the right by

point and go up by

Then we move to the left by

point and go down by

Then draw a line segment.

This line is the first equation

Let’s move on to the next equation:

The slope here is

So let’s start at

Then let’s go to the right by

point and go up by

Then let’s move to the left

point and go down by

Now, we can draw a line. This line represents the second equation 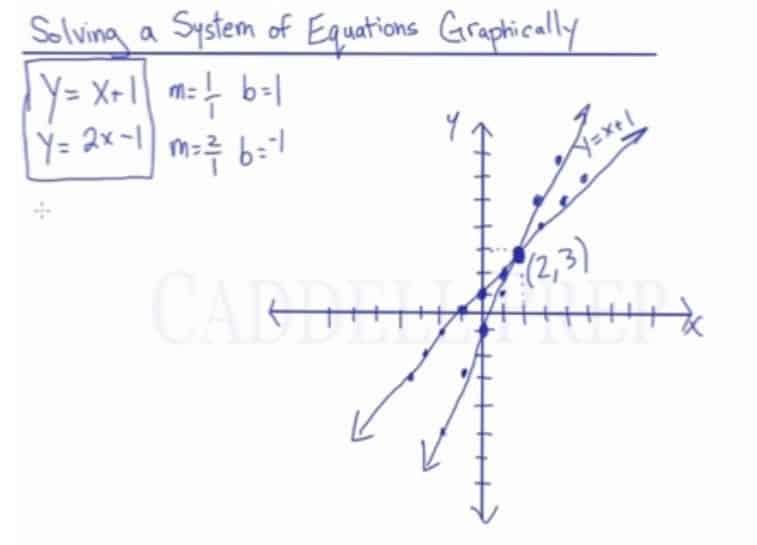 Here, we can see that the two lines intersect at

Aside from graphing, we can also use a table.