In this video, we are going to look at 45-45-90 triangles and the ratio that exists among the sides.

All isosceles right triangles have angles of

The sides are always in the ratio of

s corresponding to the lengths of the legs, and the

corresponding to the length of the hypotenuse.

Using variables, it can be written as

. These relationships can be used to find the other sides of the same special triangle when only given one side.

Using the ratio among the sides is an alternative to using Pythagorean Theorem or SOHCAHTOA. 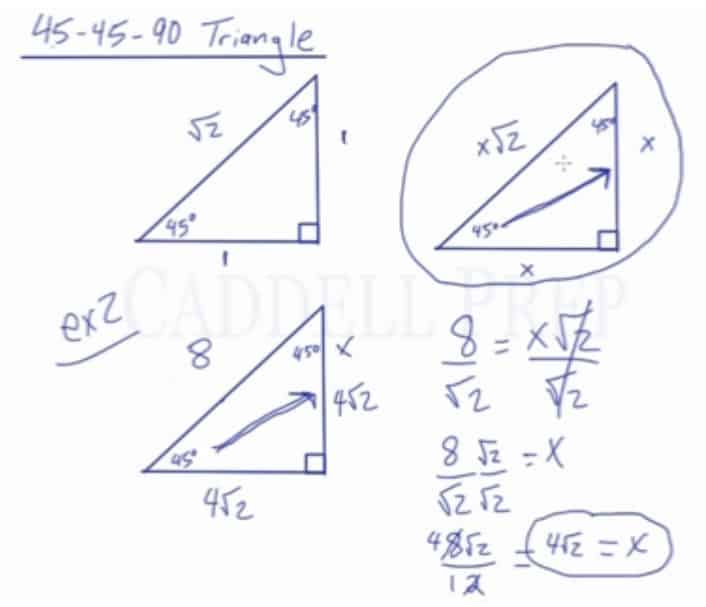 and the measure of the hypotenuse is

Given this triangle, we can draw another similar triangle by multiplying any number to these sides.

Or simply multiply the proportion by

Using this knowledge, we can find the measures of any 45-45-90 triangle if we know one of the sides.

then we can find the measure of the other sides.

First, let’s find out what is the value of

Take a look at the given.

It’s across from the

With that knowledge, we can find the other sides.

The other side which is across from

, so this side is also

The hypotenuse matches the

, so this side is

By knowing one of the sides, we were able to find the other sides just by using this diagram.

Let’s look at the second example.

What happens if we’re given the hypotenuse?

Let’s say the measure of this side is

The hypotenuse is across from the

and matches up with

We could set this equal and figure out what

But we’re not going to use this because we don’t want a radical sign in the denominator.

We have to rationalize the denominator.

To do that, we have to simply multiply the numerator and denominator by the radical.

We can simplify this more into

Now, we can use this to find the other sides.

We can find the side opposite

So, this side is

The other side is also

It makes sense because this is a 45-45-90 which is isosceles so these two sides have to be the same.

To recap, if we have a 45-45-90 triangle and we were given one of the sides, just match it up with the corresponding side on our diagram then determine what

is and then determine what the other side is.