This video shows how linear systems can be applied to word problems. After you finish this lesson, view all of our Algebra 1 lessons and practice problems.

When you encounter a word problem, it is important to write down all the important information given to you.
You would then use that information to write out the equations needed to solve the problem.
In this case, its solving by elimination, where you solve for one variable by eliminating the other variable, and then plugging your answer back into an original equation to find the other variable.
Be sure to write in the units used by the word problems. 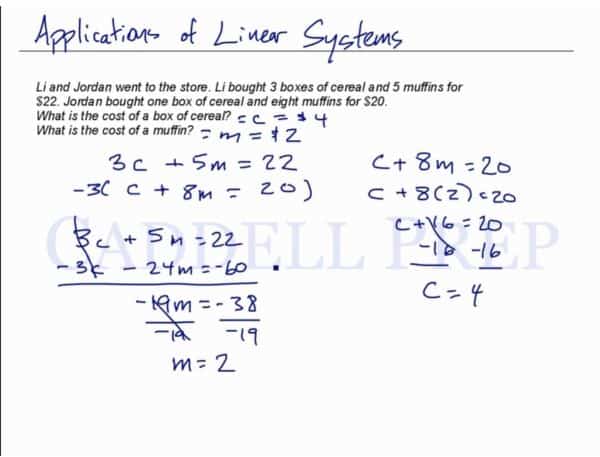 At this point, we’ll solve the problem using substitution, elimination or graphing.

Li and Jordan went to the store. Li bought

boxes of cereal and

boxes of muffins for

. Jordan bought one box of cereal and eight muffins for

cost of a box of cereal

Now we have our system equations.

Let’s solve this by elimination first.

Let’s multiply the second equation by

so we can cancel the cost of cereal.

So the cost of muffin is

Let’s substitute this value to find the value of cereal.

Let’s use the second equation to do this.

So the cost of cereal is