In this video we will be learning how to declare variables in word problems. After you finish this lesson, view all of our Algebra 1 lessons and practice problems.

Example of Declaring Variables in Algebra

The length of a rectangle is 5 units longer than the width. If the perimeter is 22 units, how long is the width?

notebooks ; a box of pencils at

and a box of pens at

. What is the price of each notebook?

= cost of each notebook

Next, use sentence to create equation

Add the contants on the right side

Therefore, the cost of each notebook is

Krishna bought a total of

more boxes of colored pink pens than of colored red pens. How many of each did she buy?

Next, use sentence to create equation

Substitute the values of

When we have word problems, we may start writing down equations based on the given then try to solve it.

But if we lost track of what the variables are, it’s highly possible to get an incorrect answer.

equal a number of something.

equal the width of a shape.

Let’s have an example.

for the first book and

for each additional book. Write an expression to represent the total cost of buying any number of books.

Let’s start with declaring the variables.

Now we need to know the total cost based on the information given.

is the number of additional books. So we subtract the first book from cost

books. The cost is going to be

because the first book is valued at 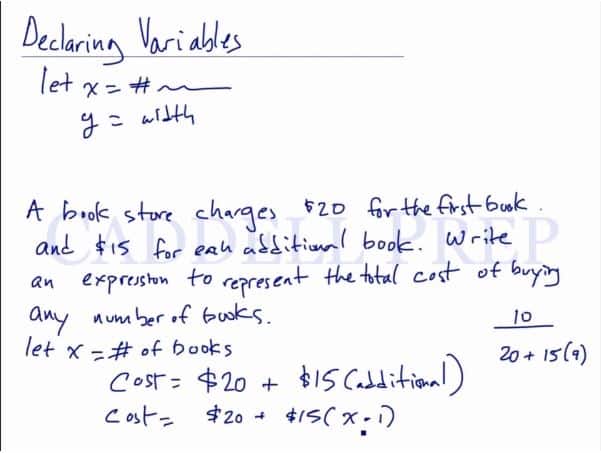 Let’s take a look at another example.

The length of a rectangle is

units longer than the width. If the perimeter is

units, how long is the width?

Since we already labeled the rectangle, it’ll be easier.

“, let’s divide both sides by

Now, let’s go back to the problem and substitute the value of