Established in 1847, City College was recognized as the first free public institution of higher education in the United States. Considered the flagship school of CUNY, it is the oldest of the system’s 24 institutions of higher learning. 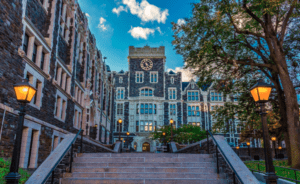 For the 2017 to 2018 admissions cycle, the City College of New York had an acceptance rate of 48%. This means that out of every 100 students who applied, 48 were accepted to the school—making its admissions process competitive.

Applicants who intend to study at the City College of New York are required to submit either ACT or SAT test scores. Students may apply to the college through the CUNY Application. CUNY City College prefers students with high grades in extensive courses and strong test scores.

It is also known for having a holistic admissions process that includes other factors beyond test scores and grades. Students can improve their chances of being admitted by submitting optional letters of recommendation and a resume detailing their extracurricular activities in high school. Do note, however, that certain programs and majors at CCNY have additional requirements.

Based on the latest statistics, there is a total of 16,001 students enrolled in CUNY City College. 13,210 students were enrolled in undergraduate programs while 2,791 students signed up for graduate programs. According to gender distribution, the school has  7,574 male and 8,427 female students. By race or ethnicity, 2,678 White, 2,501 Black, and 3,585 Asian students out of total 16,001 are attending the college.

2019 records show that CUNY City College has undergraduate tuition and fees that amount to $7,140 for New York residents and $14,810 for students living out of the State.  The graduate school tuition and fees, on the other hand, are $11,082 for New York residents and $20,232 for non-New Yorkers. 9,021 students or 68.29% of the enrolled undergraduate students have received financial aid in the form of scholarships or grants with an average amount of $8,533.

The school has its own Financial Aid office, which is dedicated to assisting students in determining the best ways through which to finance their college education. The office is responsible for administering state and federal funds to the undergraduate and postgraduate student body.  Although a majority of the financial awards provided by the office are need-based, there are also several merit-based scholarships granted annually.

CCNY is located at 160 Convent Ave, New York, NY 10031. The school can be found at Hamilton Heights overlooking Harlem in Manhattan. The Gothic campus has a size of 35 acres and spans Convent Avenue from 130th to 141st Streets. Originally designed by well-known architect George B. Post,  many of the campus buildings have been given landmark status due to their popularity.

The CCNY academic departments provide students with a diverse range of undergraduate majors and graduate degree programs. 13 on-site doctoral programs are available, along with masters programs in architecture, engineering, biomedical education, and other areas.  For all students, academics prioritize the integration of classroom learning and training through internships and research.

CCNY’s Department of Student Life offers a welcoming community for all students. More than 200 student organizations are open to the community, covering a variety of interests such as academic clubs, cultural clubs, religious clubs, and social clubs.

In men’s college basketball history, CCNY is the only team to win both the National Invitation Tournament and the NCAA Tournament in the same year (1950).

The Beavers also have a successful history in the NCAA Division III Track and Field. The Lady Beavers have placed within the top 3 several times, five times for Indoor Women and two times for Outdoor Women. When combined, the Men’s and Women’s Track teams have garnered 25 All-Americans since 1980.

Some of CCNY’s most famous graduate are the following: