Binghamton University has a student population of over 16,000 on a campus that spans approximately 900 acres. Due to its strong academic reputation, it is widely considered a “Public Ivy.”

As of Fall 2018, the number of undergraduate and graduate students attending the university is around 17,768. Listed as a census-designated area, the Vestal, NY campus has a residential population of 6,177 according to the 2010 Census.

The SUNY school had an acceptance rate of 40%, based on the 2017-2018 college admission cycle. This means that out of every 100 students who applied, only 40 of them were admitted to the university. The Binghamton acceptance rate is lower than most SUNY schools, making the admissions process of Binghamton University competitive. Prospective students need to submit their SAT or ACT scores and other requirements to apply to the school.

The remaining 16% of the admitted students are composed of residents of other US states (7.5%) and international students (8.5%) from across the map.

Since 1990, the college has experienced growth in enrollment (with a 1990 enrollment of 11,883). After President Harvey Stenger took his position in 2012, the college had launched a plan to grow to 20,000 Binghamton students by 2020, while adding faculty and staff to support the increase. 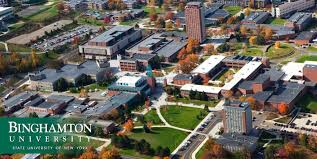 While there are a lot of requirements for a SUNY application, there are three things a Binghamton University applicant must focus on. Your average GPA, average SAT and ACT score, and other college applicant requirements.

With the school acceptance rate, only 40 out of 100 Binghamton applicants are admitted. If you meet the average high school GPA, average SAT score, and average ACT score as well as other components of the application, then you have a good chance of being part of the 40% admitted students admitted in the college.

SUNY Binghamton has an average GPA of 3.7 which means that you need to have an average high school GPA to get into the institution. If your cumulative GPA is below average, you will need to have a higher average SAT and ACT score to compensate and compete with Binghamton applicants that have higher GPA than you.

The average SAT score composite at SUNY Binghamton is a 1375 on the 1600 scale. The college follows the “Highest Section” Score Choice policy, which means that you have the option to choose which SAT tests you want to send to the college. Also called as “superscoring,” this gives you a better chance at improving your SAT score.

The average ACT score in the institution is 30. Applying at Binghamton with an average ACT score of 28 or below may give you less chance of being accepted so you need to have something in your application that will impress the admissions counselor.

Binghamton University is test optional, which means that submission of standardized test scores is not required. If you wish to submit your test scores, your highest section scores from multiple administrations of the SAT and ACT will be combined.

Binghamton University students pay tuition worth $6,670 per year for in-state residents. This amount is 5% lower than the national average public four-year tuition of $7,056. The cost is also 70% less expensive than the average New York tuition of $22,120 for four-year colleges.

Tuition ranks 32nd in New York amongst four-year colleges for affordability and is considered as the 154th most expensive four-year college in the state. For students from out of the state, the tuition is $21,550-representing a 223% premium.

Binghamton University offers a wide range of different programs to help families meet the cost of higher education. The institution requires students to file a Free Application for Student Aid in order to be offered a financial aid offer. The offer may include only federal student loans, or a combination of other funds like scholarships, loans, NYS aid, grants, and/or federal work-study.

All students in Binghamton are considered for scholarships which will be determined by the FAFSA. Scholarship for prospective students include President’s, Provost’s, and Dean’s scholarships.

The average first year financial aid offer at Binghamton University is $16,869. Roughly 58% of first year enrolled students get the chance to receive financial aid, and most of them are scholarships and grants.

Around 43% of the Binghamton University’s undergraduate students utilize federal student loans, including freshmen, with an average amount of $6,618 per year.

Binghamton University is located in Vestal, New York, United States. The 887-acre campus features a 190-acre nature preserve, and the university has been widely praised for its sustainability efforts.

The main campus is shaped like a human brain. The primary road on campus creates a closed loop to form the cerebrum and cerebellum, while the main entrance road appears as the spinal cord which leads up to a traffic circle that symbolizes the medulla.

Thus, the main road is often called The Brain. During a specific time of the year (in late fall and early spring), the connector road that goes behind the Mountainview and College-in-the-Woods residential communities is closed by the administration. This is to allow for the safe migration of salamanders across the road. The campus is spread over 930 acres of land just south of the Susquehanna River.

Binghamton offers more than 130 academic undergraduate majors, minors, certificates, concentrations, emphases, tracks, and specializations, and more than 60 master’s, 30 doctorates, and 50 accelerated (combination of bachelors’/masters) degrees. There are also interdisciplinary programs that enable individualized degree programs at both the undergraduate and graduate levels.

The school offers several early assurance programs that guarantee acceptance to graduate/professional schools outside of Binghamton, such as SUNY Upstate Medical School. Binghamton is accredited by the Middle States Association of Colleges and Schools.

In order to graduate, a student is required by the university to have completed 12 general education requirements, with some exceptions depending on the school. These include programs in aesthetics, global inter-dependencies, humanities, laboratory science, composition and oral communication, mathematics, physical activity and wellness, social science, and U.S. pluralism.

The school also offers the Individualized Major Program that allows enrolled students to determine and create their own path of study, based on their specific career goals or interests. An advisory panel of faculty and administrators determines the curriculum’s validity and approves or disapproves of a student’s proposed curriculum. Such majors may include dual topics of study, group projects, or even new courses.

There are countless ways to get involved at Binghamton. On the campus, Binghamton’s admitted students are always finding new ways to be more involved-with over 450 clubs and organizations to choose from. This huge selection has made The Princeton Review rank Binghamton as one of the top schools in the country with “more to do on campus.”

All the seven councils give governance structure for over 2,400 members and 56 chapters.

The outdoor athletic facilities include baseball and softball diamonds, tennis courts, and a championship-quality track and field facility. They also have indoor facilities include the West Gym’s basketball arena and aquatics facility, and the East Gym’s basketball arena and fit space. To improve the student-athletes’ performance, the athletic department provides strength and conditioning facilities for them, along with structured exercise and workout programs that include sport-specific regimens and weight room schedules.

Binghamton University has many notable graduates who later on pursued a wide variety of career fields and industries. Below are some of them: