Alfred State is a public college in Alfred, New York. It is part of the State University of New York (SUNY) system. Formerly known as the Technical College at Alfred, the college grants baccalaureate degrees in 19 areas, associate degrees in 50 areas, and certificates. It is a member of the Rochester Area Colleges consortium and has accreditation from the Middle States Commission on Higher Education.

The school, also called SUNY College of Technology, was founded in 1908 as a state school of agriculture. It presently offers a wide range of majors–from business to welding–and prioritizes education through hands-on instruction. 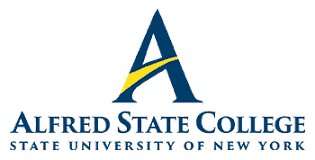 Alfred State has an acceptance rate of 72% and is generally accessible to anyone who wants to apply. Interested students are required to submit an application, high school transcripts, and their scores from either the ACT or SAT.

SUNY College of Technology accepts applications on a continuing basis, except for the Construction Management Engineering Technology program, which only accepts new students during the fall season. This entails that a majority of the school’s programs accept students on a first-come, first-served basis until they are full. When applying, freshmen students need to complete the SUNY application and Alfred supplement before submitting them with the application fee.

The school also encourages applicants to submit other documentation that demonstrates a student’s potential for success like letters of recommendation and statements that indicate extenuating circumstances.

Students applying to the college but fail to meet standard admission criteria still have a chance at obtaining a slot. SUNY Alfred offers a program called the Educational Opportunity Program that considers students on an individual basis.

For a complete list of instructions and requirements regarding admissions, be sure to get in touch with a representative of the admissions office or visit the official Alfred State website.

Alfred State is considered as moderately diverse. In terms of cultural demographics, 72% Caucasian students make up the entire student population. Black students make up 13%, Hispanics 9.2%, Asians 1.4%, and Native Americans 0.4%. The rest are either unreported or multicultural. Alfred University has a total 2,354 enrolled students.

The tuition at SUNY College of Technology at Alfred amounts to $6,670 per year for in-state residents. This amount is 5% lower compared to the national average public four-year tuition of $7,056. It’s also 70% cheaper than the average tuition of $22,120 for four-year colleges in New York.

Alfred State’s tuition ranks 30th amongst four-year colleges in New York based on affordability, and the 156th most expensive four-year college in the state. Out-of-state students, on the other hand, have tuition amounting to $6,670–representing a 0% premium. A total of $1,657 in additional fees is included in the tuition, bringing the total effective in-state tuition to $8,327.

Financial aid is given to students in the form of need-based and merit-based scholarships, grants, federally-subsidized loans, and work-study programs. For students to be considered for financial aid, they need to accomplish the Free Application for Federal Aid that is made available online starting in the month of January.

Alfred State’s 150-acre rural campus is situated 75 miles south of Rochester, NY. Established with a farm, some livestock, and three buildings, the college has eventually expanded to include 13 residence halls, state of the art smart classrooms, a motorsports facility, a developing organic farm, the Orvis Activities Center. It has also built a second campus of Applied Technology located in Wellsville, NY.

Alfred State has a new athletic field to accommodate Lacrosse, Soccer, and Football. This area is surrounded by an 8-lane running track, a Central Dining Hall, a 150-bed townhouse complex including a student activities center, the School of Architecture, Management & Engineering Technology building, and a Student Leadership Center.

More than 75 academic programs are being offered at Alfred State, consisting of both two-year and four-year opportunities. It also serves as the professional home to over 600 members of the faculty and staff.

Alfred State has an 800-acre college farm and motorsports technology facility that offers additional resources for instruction. All programs being offered in the school are registered by the NYS Education Department. Other programs also have program-level accreditation.

Additionally, the college is formally recognized as a Military Friendly campus. On top of the degree and certificate programs, SUNY College of Technology at Alfred offers programs like ROTC, an Honors Program and a High School Challenge Program. The latter is a program working with local high schools and middle schools to create interactive and challenging projects to help students learn in an interdisciplinary manner.

At Alfred State, a huge part of the education takes place beyond the four walls of the classroom. That’s why students can participate in more than 100 clubs and civic groups, as well as 18 NCAA Division III athletic teams. Due to its breath-taking location, students are free to participate in endless outdoor recreational activities.

Choices include clubs within the performing arts, civic engagement, and WETD the college radio station.  Those who want to join more active groups can check the offerings from campus recreation. The school also promotes understanding and celebrates diversity by encouraging students to join a multicultural club.

The Greek Senate has established an autonomous Greek Judicial Board, which allows for the full self-governance of the Alfred Greek System. This group is in charge of adjudicating cases of organizational misconduct.

Hazing is not permitted by any organization on campus–also enforced by state law–most especially in any sorority or fraternity. All members of the Alfred State community are expected to abide by all laws and college policies.

Alfred State students also celebrate annual festivals. In 1972, two students started a charity festival known as “Hot Dog Day” that was meant to be a charity fundraiser for the area. It has turned into a tradition for the school and is now being held on the third weekend of April. Hot Dog Day is a celebration coordinated through both Alfred University and Alfred State.

In Fall 2008, Alfred State also started hosting a Homecoming celebration hosted annually. This event is held in part at the new athletic complex and organized in tandem with Family Weekend.

In April 2013, the NCAA Division III Management Council announced that Alfred State has been accepted as provisional members. This has moved the school into the NCAA Division III competition, effective in the 2013-2014 school year. Three years later, it was announced that the Alfred State Pioneers football team would be competing the Eastern Collegiate Football Conference for the 2017 season.

Alfred State was home to many distinguished individuals who have excelled in the field of business, sports, architecture, racing, and so on. A few of the school’s famous alumni are the following: