Located in Oswego Town, New York, SUNY Oswego is an above-average college established in 1861. The school has two campuses: the historic lakeside campus in Oswego and Metro Center in Syracuse, New York.

SUNY Oswego started out as the Oswego Primary Teachers Training School by Edward Austin Sheldon, who revolutionized American education with a new methodology known as the Oswego Movement.

In 1942, the New York Legislature recognized the institution as a degree-granting teachers’ college called the Oswego State Teachers College, which was a charter and founding member of the State University of New York (SUNY) system. The college went on to widen its scope and became a liberal arts university.

The school is considered selective with an acceptance rate of 54% and an early acceptance rate of 74%. When applying to SUNY College at Oswego, students should take note that the application is rolling and the deadline for early action is November 30. Requirements should be submitted along with an application fee amounting to $50. Meanwhile, scores for the ACT or SAT exam are due on May 1.

Interested applicants are encouraged by the school to send in their applications during the fall term between August 1 and January 15 so all paperwork will be processed. Those who apply after January 15 will be considered on a slot-available basis. For spring term applicants, they are encouraged to apply by November 15.

The latest statistics show that SUNY College at Oswego has a total of 8,026 students. 7,125 students were enrolled in undergraduate programs while 901 students pursued graduate programs. Based on gender distribution, there are 3,951 male and 4,075 female students in the school.

According to 2019 data, the undergraduate tuition and fees of SUNY College at Oswego are $8,440 for New York residents and $18,220 for students who are living out of state. For the graduate school, the tuition and fees amount to $12,211 for New York residents and $23,771 for those outside the state. 5,595 students, which is 78.53% of the enrolled undergraduate students, have received scholarships or financial aid which approximately amounts to $8,046.

Founded in Oswego, SUNY at Oswego was established to train teachers to meet pressing needs in the education sector. After the construction of Sheldon Hall, the school was moved to its current location on the Lake Ontario shore. Presently, the school is located 690 acres along Lake Ontario. 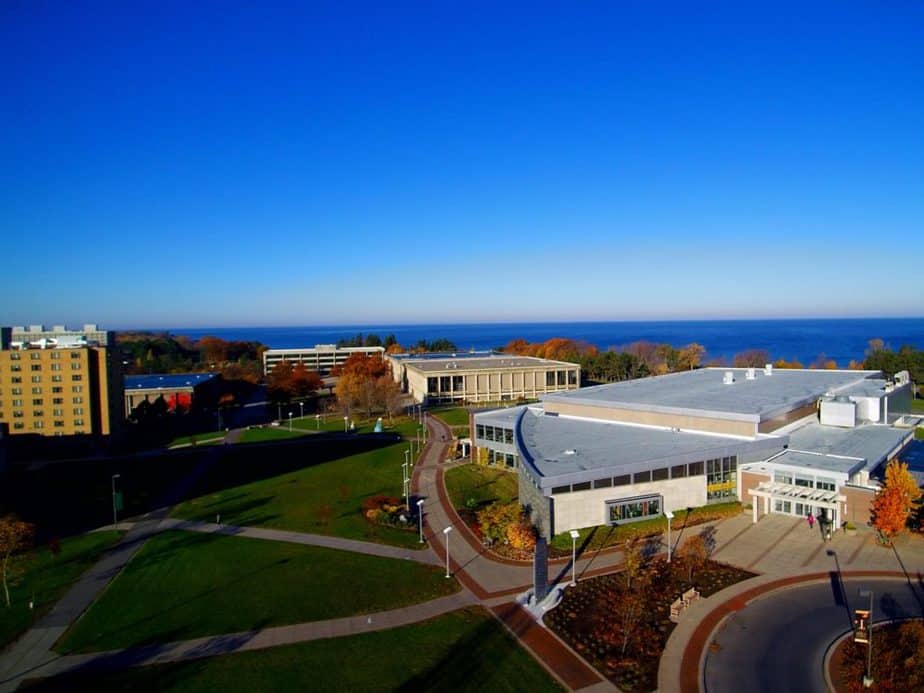 It now has 46 buildings with classrooms, laboratories, residential and athletic facilities. In recent years, the school launched a $700 million-worth campus-wide renovation and renewal program, turning the new Campus Center as its main social hub.

Baccalaureate and graduate programs are offered through four different colleges, with most of it being offered by the College of Liberal Arts and Sciences. Other colleges include the School of Education, the School of Communication, Media and the Arts, and the School of Business. Each college also lets students choose from a combination of degrees from each college.

SUNY College at Oswego is a firm believer in hands-on learning. Undergraduate and graduate students are given the chance to participate in creative activities, research projects and many scholarly undertakings that are usually exclusive to graduate students in other schools.

The college takes pride in having high-end facilities, along with unique programs like the Possibility Scholars, a research program for first-year science majors, and the Global Laboratories program, that enables students to take advantage of SUNY’s global scientific network.

More than 150 clubs and organizations are offered by SUNY Oswego for students to consider. These groups include multiple sports teams known as the Lakers as well. They all compete in the NCAA Division III State University of New York Athletic Conference.

The State University of New York at Oswego offers many ways to help students ease into college life. For instance, all full-time undergraduates below the age of 21 are required to live on campus, unless they are married or commuting from their parent’s home.

With the school’s First Year Residential Experience program, freshmen may opt to live exclusively with other students in their class. Other freshmen may live among juniors, sophomores, and seniors.

The Oswego Lakers participate in the NCAA Division III athletics organization, which competes in the State University of New York Athletic Conference. However, the women’s hockey team is an exception because SUNYAC does not offer the sport.

There are various intercollegiate sports in the organization including men’s and women’s basketball, cross country, ice hockey, lacrosse, soccer, swimming & diving, tennis, and track & field. Men also have the option to participate in baseball and wrestling, while women may join softball, field hockey, softball, and volleyball.

Besides the varsity sports, SUNY College at Oswego also offers three different types of intramural sports: competitive, instructional and recreational. Activities under that category include badminton, ice hockey, fencing, rugby, dance, and paintball. Students are also allowed to use the school’s pool and fitness facility.

SUNY Oswego was once home to many alumni who have since excelled in their chosen fields of career. Below are some of the most notable graduates of the school: