The State University of New York College at Oneonta—also known as O-State, Oneonta State, or SUNY Oneonta—is a four-year, public, liberal arts college in Oneonta, New York. Found in the picturesque rolling hills of central New York close to Cooperstown, it is one of the schools that belong to the State University of New York (SUNY) system. Oneonta is considered a highly selective educational institution that offers students not only liberal arts & sciences majors but also pre-professional and teacher preparation programs.

While the college has some graduate programs, it’s main focus is on the undergraduates. Its core curriculum is in the liberal arts and sciences, and it often ranks high among best values in college and public colleges. The campus has an average class size of 21 and 17 to 1 student/teacher ratio. 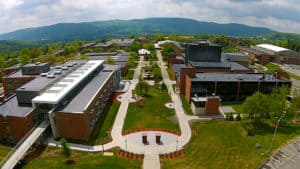 SUNY Oneonta is considered selective with an acceptance rate of 60%. Students who have excellent test scores and good grades have greater chances of being admitted, particularly those who have a range of extracurricular activities and work/volunteer experience.

When applying, students are required to submit their high school transcripts, a letter of recommendation, and SAT or ACT scores. The school also accepts the SUNY Application or the Common Application. Both applications can be accessed by applicants online.

SUNY Oneonta is categorized as a Master’s College and University (smaller programs) by Carnegie Classification. The highest level of offering in the campus is a Master’s degree. The cost of tuition and fees at Oneonta for New York residents is $8,421, while the cost for out of state students is $17,871.

Approximately 3,653 students, or 61.50% of the enrolled undergraduate students, have received scholarships or financial aid that amount to an average of $8,293. Each year, over $4 million in scholarships are awarded to Oneonta students.

SUNY College at Oneonta is located at 108 Ravine Pkwy, Oneonta, New York. Aside from its academic and residential buildings, the campus houses the SUNY Oneonta College Observatory. Found at the College Camp on the northeastern side of campus, this facility has the largest optical telescope in New York State. The telescope is also believed to be one of the largest telescopes open for public observing east of the Mississippi.

The College Camp can be found at 119 Hoffman Road—established on 276 acres of former farm and woodland. Its primary purpose is to give the campus community educational, recreational and social opportunities.

The college focuses on a hands-on experience via a diverse range of learning opportunities like research, internship, and service. Oneonta is highly praised for having a genuine interest in the success of each student.

Around 125 clubs and 21 intercollegiate athletic teams are offered at SUNY College at Oneonta. More than 3,000 students live in the school’s 15 residence halls, which offer living arrangements that vary from doubles to apartments.

Also available are four freshman Living Learning Communities (LLCs) that cater to students who are interested in teaching and social justice, leadership, pre-health professions, and sustainability and the outdoors.

Sodexo mainly provides dining services at the campus. In fact, the residential dining halls at Oneonta were recognized as the first in the country designed specifically for Sodexo’s Campus Crossroads program. Apart from unlimited dining plans, the program offers options for additional dollars for purchases at cafes and other retail facilities on campus.

The school is represented by the Oneonta Red Dragons. Teams currently participate at the Division III level at the State University of New York Athletic Conference. They have been members of the conference since its inception in 1958.

SUNY Oneonta has many alumni that span the entire globe and these graduates have excelled in their chosen fields of career. Most of the notable members of the SUNY Oneonta community have pursued successful careers in science, politics, business, music, entertainment, broadcasting, sports, and so on. Below are a few of the school’s most famous alumni: