Also a member of the SUNY Eye Institute, the school is located in the former Aeolian Building in midtown Manhattan. The said establishment was built in 1912 for the Aeolian Company, which is a known piano manufacturer. 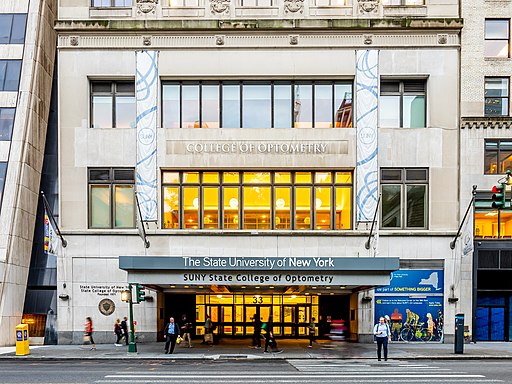 There are approximately 80 to 100 optometry students enrolled in the school’s professional degree program every year. Roughly 20 of these students go on to pursue an M.S. degree in Vision Science across the four years.

SUNY College of Optometry only provides graduate school. For the academic year 2018-2019, the tuition and fees for in-state residents amount to $13,001 while the costs for out-of-state students amount to $24,561.

It’s also worth noting that the tuition and fees in SUNY College of Optometry are a bit higher than the average amount of similar public health schools’ tuition, which amounts to $21,137.

Spanning 298,000 square feet, the campus can be found at 33 West 42nd Street, New York City. The school has a University Eye Center that offers eye care, corrective lenses, and vision therapy to the public. This facility is one of the largest outpatient eye clinics in the country, recording over 73,000 patient encounters in the years 2012 to 2013.

The College of Optometry offers degrees in the areas of vision science and optometry. After undergraduate school, students may take the Doctor of Optometry (OD), a four-year professional program. Students pursuing the program generally have majored in the natural sciences at the undergraduate level. There are select undergraduate colleges that offer accelerated acceptance.

Doctors of Optometry are widely recognized as the main providers of eye care. They offer treatment for different ocular diseases and prescribe glasses and contact lenses. They are also responsible for treating patients with various conditions that affect their ability to effectively function in daily life.

There’s also a Ph.D. program in vision science—a research degree that focuses on the structure and processes of vision. A bachelor’s degree in the sciences is recommended in order to be admitted to this program.

Additionally, SUNY College of Optometry has research and graduate programs that are administered through the Graduate Center for Vision Research. At present, the said facility receives nearly $4 million in annual funding for research grants. Clinical research in the school is conducted through the Clinical Vision Research Center.

There are lots of things to do for students who have different passions and interests. SUNY College of Optometry offers students with many different clubs and organizations to choose from.

*No data found in this section.

Since its foundation in 1972, SUNY College of Optometry has produced thousands of alumni who became notable personalities in the field of optometry. Below are some of them: