In this video, we will be learning how to solve for x (or another variable) in complex algebraic equations using inverse operations. After you finish this lesson, view all of our Pre-Algebra and Algebra lessons and practice problems.

Subtract 2 from both sides

Divide by 5 on both sides

Subtract 4 on both sides

Another way of doing this problem:

Distribute the 5 to the x and the 4

Subtract 22 from both sides

Divide by 5 on each side

Let’s get into solving complex algebraic equations. This involves more than one operation.

To review, order of operations or PEMDAS, we have

In solving algebraic equations, we don’t have all whole numbers. Instead, we have variables in it.

So, we may have

From our example, we already know that

But let’s try solving this algebraically.

We just have to do few steps to solve this.
1. Simplify both sides of the equations, if possible.
2. If there’s

terms on both sides, we have to get all the

terms on one side. You can have it on the left side or on the right side, whichever you prefer.
3. Reverse PEMDAS. We’re going to do the order of operations backward using inverse operations.
4. Our goal is to isolate the variable 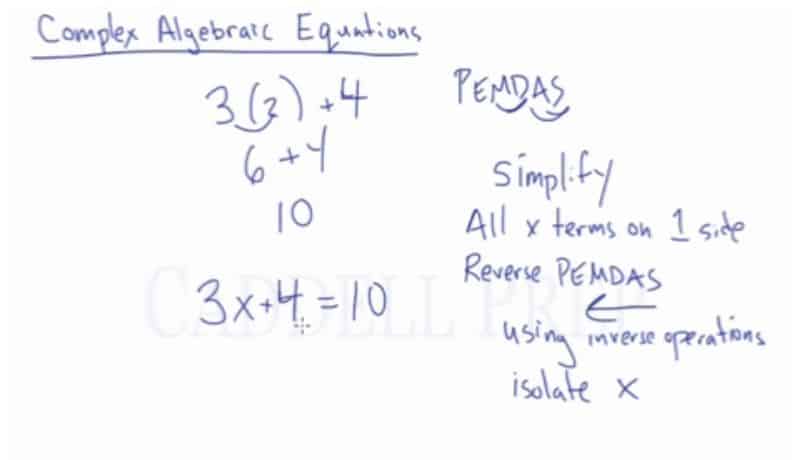 , let’s do the steps above.

term on one side – There’s just one

and it’s on the left.
3. Now, let’s do the reverse PEMDAS using inverse operations.

Here we have to divide both sides by

Let’s do another example.

So, let’s start off by adding

Let’s have one more example. I’ll show you how to solve this using two different ways.

First method of solving is this:

Then, we have to divide both sides by

we have to subtract

So now let’s move on to the second method of solving the same equation.

The second method is to simplify the equation as much as we can.

Let’s start off by distributing

into the equation in the parenthesis –

Then we have to do the reverse PEMDAS.

Now, let’s do the inverse of multiplication which is division.

Divide both sides by

Both methods gave us the same answer 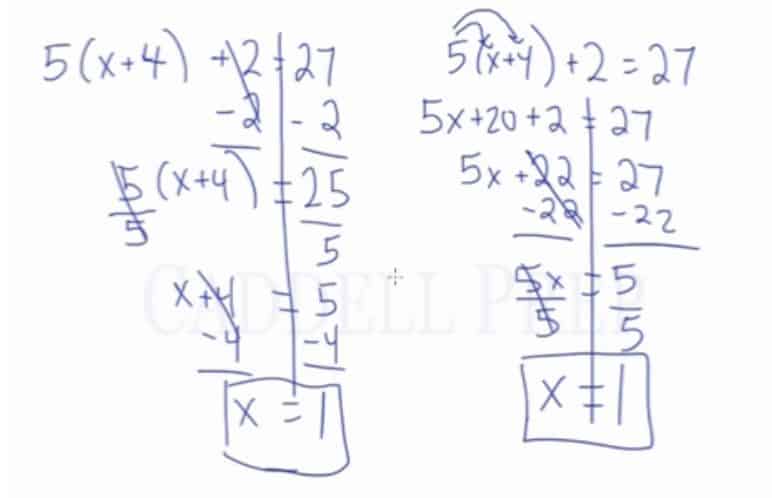 To sum up, no matter how complex our algebraic equation is, we can do reverse PEMDAS or inverse order of operations to isolate the