In this video we will take a look at how the scaled score is determined on the SHSAT and how to account for that when preparing for the SHSAT. Want to convert your score? Try our SHSAT Score Calculator.

The way scoring works on the SHSAT is that they score the ELA section and the Math section separately then add it together.

Each section is worth up to 400 points and the highest score you can get in SHSAT is 800, theoretically.

However, each year the highest score is in the low 700s.

It gets a little tricky so let’s look at an example.

Here, we have the old scoring table. 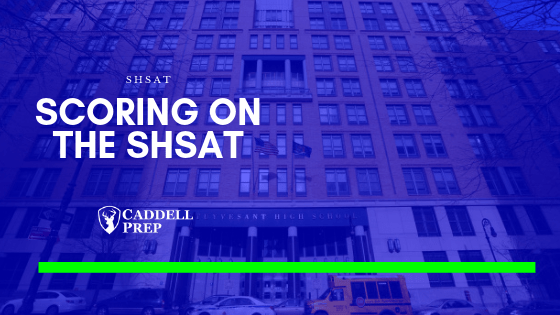 In the middle area, each correct answer increases by 4 points.

Bu then, it changes again when we go out in the middle.

My point is if you increase your score at the high-end for one of these tests, you’re going to increase your overall score significantly.

These are the 2017 cutoff scores for a few schools and let’s look at an example.

The scale didn’t change so the student still didn’t make it in Staten Island Tech or Stuyvesant. But if we look at a more drastic one, we will see that it would make a difference.

But let’s say we’re aiming for a higher score. It’s more noticeable if we look at greater scores.

Now, of course, you don’t have to get a 50 right? You can improve this also and then improving that will increase your chances of getting to a more selective school such as Stuyvesant.