New York City College of Technology, also referred to as NYCCT or City Tech, is a public college of technology located in downtown Brooklyn. Founded in 1946, the school belongs to the extensive City University of New York (CUNY) system.

City Tech was initially established to offer training to GIs returning home after World War II. It has then evolved from a hundred students to more than 14,000 degree students and an additional 15,000 students of continuing students at present. The school is just a few steps from a subway stop and multiple bus lines and is non-residential. 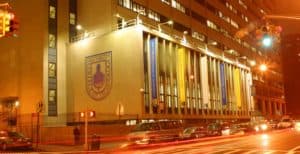 CUNY New York City College of Technology has generally accessible admissions with a 75% acceptance rate. Keeping in line with their mission to provide technical education to any adult who wants it, admissions to the school are open.

Prospective students are required to submit a formal application, modest fee, proof of immunization, and high school diploma or equivalent. Applicants should also select their intended schedule (day or evening classes) and major area on their forms, as there are limited slots in most programs.

City Tech has one of the most diverse student bodies in the world. Around 42% of students were born outside the United States and come from almost 140 countries. Roughly 61% of students state that a language apart from English is spoken in their home. By race or ethnicity, 34% of the student body self-identifies as African American, 32% as Latino American 11% as Asian American, and 11% as European American.

Approximately 64% of degree-seeking members of the City Tech student body are enrolled full-time while the other 36% are attending as part-timers. 35% of students are part of the working force—these students work 20 hours a week while attending school. The average age of a City Tech student is 21. By gender distribution, 53% of the student population is male and 47% is female.

For the 2017 to 2018 admissions cycle, the undergraduate tuition and fees of CUNY New York City College of Technology amount to $7,120 for New York residents and $14,790 for those leaving out of the state. 10,796 students or 62.48% of the enrolled undergraduate students have received financial aid in the form of grants or scholarships with an average amount of $7,242.

City Tech is located at 300 Jay St, Brooklyn, NY 11201. It is made up of nine buildings within DUMBO, MetroTech BID and Downtown Brooklyn’s Tech Triangle. College Administration and Offices, the Ursula C. Schwerin Library, the School of Professional Studies, and the School of Arts & Sciences are based mainly in a complex formed by the Library, Namm, General, and Pearl buildings found in MetroTech.

The School of Technology & Design is based in DUMBO’s Voorhees Hall with Graphic Arts based in the MetroTech Complex.

The school has a new Academic Complex, which is an eight-story building that serves as home to City Tech’s expanding programs in the sciences and healthcare. Included in the departments that moved into the new building are the core sciences: Physics, Chemistry and Biological Sciences (including Biomedical Informatics). The complex also has the Nursing, Radiologic Technology & Medical Imaging, Dental Hygiene, Restorative Dentistry, and Vision Care Technology departments.

Also housed in the Academic Complex is a 1,000-seat concert hall quality auditorium—the biggest of its kind in Downtown Brooklyn. Students and faculty may access a wellness center and faculty office space in the facility as well.

More than 60 pre-professional, professional, and technical programs are being offered by City Tech. Fields of study that students may pursue include architectural and engineering technologies, human services, advertising and publishing, hospitality, business, and computer science. There are also 14 credit-bearing certificate programs in a wide array of subjects to provide specialized work of limited duration. A total of 28 associate degrees and 19 bachelor’s degrees are offered by the college.

For students who need assistance with one or more basic skill areas, City Tech offers immersion programs. There are summer classes for remedial math, reading, writing, and English as a Second Language (ESL). Classes in these areas are offered tuition-free.

Coordinated Undergraduate Education (CUE) is a program sponsored by the Chancellor’s Office of the City of New York. It integrates programs across the diverse student body and wide curriculum offerings. Students may also receive support through the Freshman Year Program, the Learning Center, the New Student Center, and the Counseling Services Center.

City Tech hosts several social, cultural, and academic clubs, as well as organizations that cover a diverse range of interests. Because it is a non-residential school, club hours are only held every Thursday afternoon. Students may participate in a wide variety of religious, recreational, and professional organizations where they can meet fellow students and exchange ideas.

The school’s placement office has extensive work placement opportunities students and alumni may join in. Students, in particular, are encouraged to join in internship and service-learning programs around the city.

Learning communities exist in City Tech to assist students in establishing not only academic but also personal connections to one another. Members of a learning community take up at least two classes together, including several subjects in different disciplines.

The athletic department of City Tech is a member of 14 intercollegiate sports in NCAA Division III and the CUNY Athletic Conference. Women’s division teams play sports including basketball, cross country, softball, track and field, tennis, and volleyball. Meanwhile, men’s sports are basketball, cross country, soccer, track and field, tennis, and volleyball. The school’s official mascot is the Yellow Jacket and its official colors are gold and blue.

Some of the most recognized individuals who attended and graduated from New York City College of Technology include: