The John Jay College of Criminal Justice—also known as John Jay or John Jay CUNY—is a New York City-based public college specializing in criminal justice. It is a senior college that belongs to the extensive City University of New York (CUNY) network. Established in 1964, the school only criminal justice-focused liberal arts college in the United States. It is best known for its criminal justice, forensic science, forensic psychology, and public affairs programs. 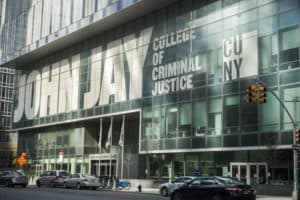 While 95% of enrolled students are from New York State, the college takes pride in having a diverse and inclusive campus community. More than 75% of the student body self-identifies as a minority (39% Hispanic, 28% White, 21% Black, 12% Asian) and over 130 nationalities are represented among those who are enrolled in the school.

Diversity in the college is highlighted even further due to the fact that 47% of the student body are first-generation Americans, roughly half speak a language other than English at home, and 33% were born in a foreign nation.

John Jay College is located at 524 W 59th St, New York, NY 10019. The campus is just a few blocks away from Central Park and is near the Museum of Modern Art, Carnegie Hall, and Times Square. There are also many other New York City treasures that are never more than a short walk or subway ride away from the school.

At John Jay College, there are several centers that provide information often used by businesses, researchers, and the media. Examples of these facilities are the John Jay Leadership Academy, the Center for Cybercrime Studies, the Prisoner Reentry Institute, Center for International Human Rights, and CUNY Dispute Resolution Consortium.

Undergraduate degrees in Bachelor of Arts and Bachelor of Sciences are being offered as well. Students may select from 21 different majors available, which include Correctional Studies, Criminology, Fire Science, Forensic Psychology, Legal Studies, and Public Administration.

Most of the clubs and organizations are housed in “Club Row,” which is a series of hallways where the groups are given space to convene.

The school’s mascot is the Bloodhound and its official colors are light blue and navy blue. In the men’s division, John Jay College field teams in soccer, cross-country, basketball, tennis, and rifle marksmanship.

A few of the most popular graduates of CUNY John Jay College of Criminal Justice are: