Hunter College is an institution for higher learning in New York that belongs to the City University of New York (CUNY) system. Founded in 1870, it started out as a women’s college that did not accept male freshmen until 1946.

The main campus has been situated on Park Avenue since 1873. The campus expanded in 1943 when Eleanor Roosevelt decided to dedicate Franklin Delano Roosevelt’s and her former townhouse to the college. The property was opened again in 2010 as the Roosevelt House Public Policy Institute at Hunter College.

Hunter offers programs in over 100 undergraduate and postgraduate fields across five schools. It is also the administrator of both the Hunter College High School and Hunter College Elementary School. 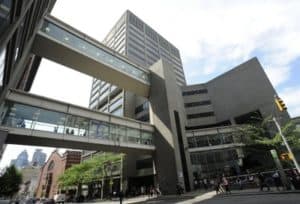 For students who entered CUNY Hunter College in the 2018-19 academic year, the acceptance rate was 36%. This means that for every 100 applicants, 36 received acceptance letters and 64% were rejected. As these numbers suggest, Hunter has a selective admissions process.

2019 statistics show the undergraduate tuition and fees of CUNY Hunter are $7,182 for New York residents and $14,852 for those living outside the state. For graduate school, the tuition and fees amount to $11,078 for New York residents and $20,228 for others. A total of 10,681 students or 63.41% of the enrolled undergraduates have received financial aid in the form of grants or scholarships which takes the average amount to $8,109.

Established in the Lenox Hill neighborhood of the Upper East Side of Manhattan, New York City, the school has two satellite campuses: The Silberman School of Social Work Building and the Brookdale Campus.

Hunter College is known for having an impressively diverse study body. The school’s location in New York City provides students with a bustling world of cultural, social, and professional experiences.

The main campus is located within walking distance of Central Park, as well as many of the most prestigious cultural institutions in the Big Apple, including the Metropolitan Museum of Art, the Asia Society Museum, and the Frick Collection.

The main campus houses the School of Arts and Sciences and the School of Education. It has many facilities that serve not only the college but also the surrounding community. This part of the campus is known particularly as a center for the arts.

There’s also the Assembly Hall, which seats more than 2,000. It serves as a major performance site for many programs.

There are also other learning facilities in Hunter including biomedical and other science labs, such as the Dolciana Mathematics Learning Center, the Physical Sciences Learning Center, and the Leona and Marcy Chanin Language Center.

Several research facilities are hosted by Hunter College, including the Brookdale Center on Aging, the Center for Study of Gene Structure and Function, and the Center for Puerto Rican Studies (CENTRO).

Approximately 150 student clubs and organizations exist on the campus.  The college has a particularly close relationship with the international Model United Nations Conference. The model UN team has been widely acclaimed as one of the best in the world, and they take part in debates at Oxford, Columbia, Harvard, Yale, and other prestigious institutions.

There are students who use their experience in the model United Nations to pursue careers at the U.N. after they graduate. No residential sororities or fraternities are operating in the school but there are chapters of each that meet for community work and social purposes.

One of the most interesting offerings of the campus when it comes to athletics is it’s huge, modern, and completely underground Sportsplex. The Sportsplex has multiple several gyms, a weight room, a training room, racquetball courts, and many other facilities for sports. The Sportsplex is also recognized as the deepest building in the entire New York City.

Some of the most well-known Hunter College graduates are the following: