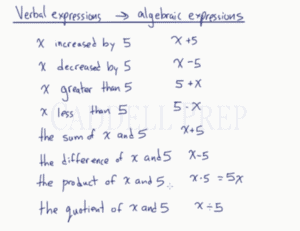 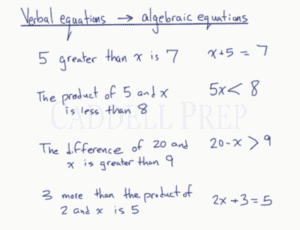 which we know is

Therefore, the algebraic expression is,

Since quotient is the answer to division, it would be

since it’s a decrease, we are taking

and we’re increasing it by

. So think about this, if we have

away from it. So it’s

, difference is the answer to subtraction so we have is

Then the product of

which we know is

The order isn’t important in multiplication and addition.

, since quotient is the answer to division our answer would be

You should get familiar with these different expressions. Some may memorize these. But it’s nice to look at these expressions and make sense of it.

Verbal equations are expressions that have equal signs.

Let’s have some examples.

more than the product of

Let me point out the difference between these two:

“Is” in the sentence is an equality sign. That’s why we come up with the less than sign.