This video describes absolute value functions and how they are graphed. After you finish this lesson, view all of our Algebra 1 lessons and practice problems.

A translation is a shift of a function on the coordinate plane. An absolute value function can be shifted vertically and horizontally.

If a constant is added/subtracted outside of the absolute value bars (ex.

If a constant is added/subtracted within the absolute value bars (

An absolute value function can also be dilated or compressed.

If a function is multiplied by a constant larger than one (

If a function is multiplied by a constant smaller than one (

Graphing can be done by creating a table and plugging in values to find coordinates. 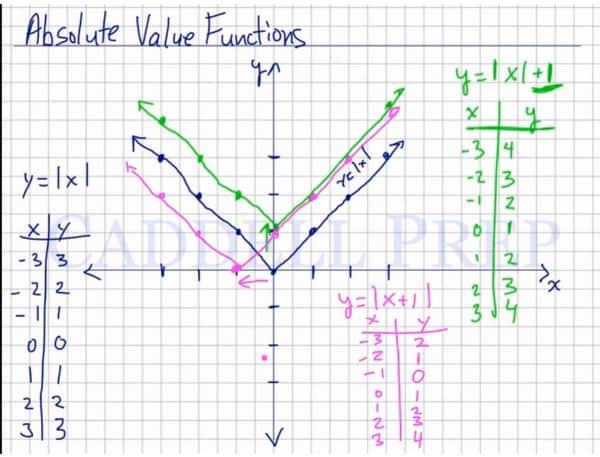 So the actual basic line is

Now let’s graph this using the coordinates above.

Let’s have a more complicated one.

Let’s get the value of

If we graph this, we’ll have another line that looks like a letter “V”.

But since we added

to the absolute value of

, we shifted the whole function up by

Let’s get the value of

spot as compared with our first example.

So, if we’re going to add a number after we get the absolute value of

And if we add a number to the value of

before you get the absolute value, we’ll move to the left.

then we move up by that number;

then we’re going down by that number;

then we’re going to the left by that number;

then we’ll move to the right by that number.

, then we’re going to move to the right by

Let’s look at these two examples:

Let’s draw the regular absolute value graph as our base graph.

To draw the examples, let’s apply the rules above.

spots to the left and up by

, we’re going to move to the right

spots and down by

Instead of our regular slope, we’ll have a slope steeper by that number. In our example, it’s

We’ll have a line that the slope is up by

Let’s see what happens if we multiply the absolute value by a fraction.

Then, we’ll have a line that’s less steep.

The line will be wider than the regular one.

Next, let’s see what happens when the absolute value has a negative in front.

Here, our line will be upside down as compared to the regular absolute value function.

We’ll have a line that goes down by

Here, it’s negative so our line will be upside down,

so we’ll move to the left by

so we’ll go up by