Brooklyn College is a public college located in Brooklyn, New York City. It serves as a constituent of the City University of New York (CUNY) system. The school was founded in 1930 along with the establishment of an extension division of the City College for Teachers. The school went on to provide evening classes for male freshmen students in 1917.

In 1930, the New York City Board of Higher Education authorized the college to allow the combination of the Downtown Brooklyn branches of Hunter College (a women’s college at the time) and the City College of New York (then a men’s college). Both schools had been established in 1926.

Following the merger of the two branches, Brooklyn College rose to be the first public coeducational liberal arts college in New York City. 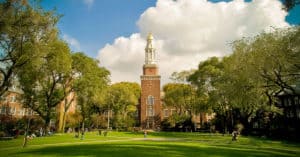 For the 2017 to 2018 admissions cycle, Brooklyn College had an acceptance rate of 44%. This percentage means out of every 100 students who applied to the school, only 44 students were accepted to the school. This made the admissions process in the school more competitive than others.

Because Brooklyn College accepts less than half of applicants, getting admitted into the school is not easy.

First-year students who want to apply to Brooklyn must submit application and fee along with their GED diploma with scores, SAT scores, and official high school transcripts. SAT scores are considered as official if they are directly sent to the university from the testing site or listed on the high school transcript. Additionally, there is a suggested academic preparation course list made up of English classes, social studies, foreign languages, math and science courses.

Students who intend to transfer, are from another country, or who plan to apply for continuing education, adult education, or programs with other application requirements should contact the university. Doing so will help them determine the necessary requirements in order to be considered for admission.

Based on the latest data, the undergraduate tuition and fees of CUNY Brooklyn College are $7,240 for residents of New York and $14,910 for those living outside the state. For the graduate school, tuition and fees amount to $11,202 for New York residents and $20,352 for others. 9,520 students or 64.81% of the enrolled undergraduate students have received financial aid in the form of grants or scholarships with an average amount of $7,899.

Financial aid is open to all students of Brooklyn College—both undergraduate and graduate students may receive aid in the form of need-based and merit-based grants, scholarships, loans, and work-study programs.

To be eligible for financial aid, students are required to accomplish the Free Application for Federal Student Aid (FAFSA) that can be accessed online starting in January. Students will have to submit financial information for themselves and their families, as well as have this information readily available when in the process of completing their application.

Brooklyn College can be found in the Brooklyn borough of New York. Spanning 26 tree-lined acres, the college has recently gone through a renovation and added modern, cutting edge facilities for students to enjoy.

Brooklyn College has academic divisions that offer almost 130 undergraduate programs in the fields of natural and social sciences, arts and humanities, business and education. All students take part in the core liberal arts curriculum that aims to sharpen the mind, establish awareness, cultivate intellect and imagination and improve cognitive skills that equip students for successful lives and careers.

The school has a First College Year summer program, which precedes the freshman year. This program helps ease the transition for students between high school and college.

Students may also take part in the Learning Communities that offer support systems for students through interaction with other students and faculty. The Honors Academy, on the other hand, equips students for professional careers as engineers, lawyers, and doctors. Aside from individual degree programs, students may also opt to join interdisciplinary programs that offer a flexible, broad education in different fields of interest.

Student life at Brooklyn College is considered varied and active, partly because of the rich and diverse cultural background of the surrounding area. More than 100 student clubs and organizations in the school present the opportunity for participation in a wide range of cultural, religious, social and community activities.

The college also has an active Greek life. There is an athletics and recreation club that enables students to join in sports at different competitive levels. Students often hang out in the library and the library café that is open for 24 hours.

The school has a variety of intercollegiate sports, intramurals and recreational activities so students can participate in all levels of competition. Brooklyn College joins at the intercollegiate level as an NCAA Division III organization.

The Brooklyn Bulldogs has both men’s and women’s divisions on basketball, cheerleading, cross country, swimming and diving, tennis and volleyball. Women also have the option to participate in soccer.

For intramural sports, students can join team sports, individual sports, and one-day events. These events are aimed at giving students a chance to participate in an enjoyable and relaxed manner. Sports open to everyone include basketball and co-ed tennis and volleyball. Another big hit on the campus is free-throw contests. Other activities for recreation allow students the use of a fitness center, basketball and racquetball courts, and a swimming pool.

Brooklyn College is known for its many notable alumni including: