Baruch College, officially the Bernard M. Baruch College, is a public educational institution in New York City. It serves as a constituent of the City University of New York (CUNY) system. Named after statesman and financier Bernard M. Baruch, the college offers undergraduate, masters, and Ph.D. programs through its Zicklin School of Business, the Weissman School of Arts and Sciences, and the Marxe School of Public and International Affairs. 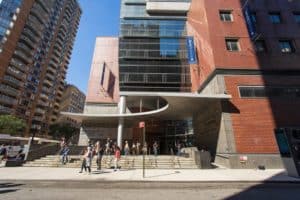 Baruch College is a public research university that has an acceptance rate of 39%. Nationally ranked, the school belongs to the most selective of the 25 campuses that make up The City University of New York (CUNY).

Students may apply to the school through the CUNY application. Baruch College prefers applicants who have high grades in rigorous courses and strong test scores. Despite its low acceptance rate, Baruch adopts a holistic admissions process that involves other factors beyond test scores and grades.

Applicants may increase their chances of getting into the college by providing an optional application essay, an extensive list of extracurricular activities, and glowing letters of recommendation.

Based on a U.S. News & World Report, Baruch College has the most diverse student body in the country. Students in the campus come from more than 90 different cultural and ethnic backgrounds and 150 nationalities. Baruch students also get sufficient opportunities for college governance and are capable of organizing their own activities through the Undergraduate Student Government and the Graduate Student Assembly.

2019 data show that the undergraduate tuition and fees of CUNY Bernard M Baruch are $7,262 for New York residents and $14,932 for students outside the state. Meanwhile, the graduate school tuition and fees are $11,130 for residents of the city and $20,280 for others. 9,078 students or 59.52% of the total enrolled undergraduate students have received financial aid in the form of grants or scholarships that have an average amount of $7,797.

To be considered for financial aid, students are required to complete and submit the Free Application for Federal Student Aid (FAFSA). Applicants must take note of the financial aid deadline of April 1. To be eligible for such aid, students should either be U.S citizens or eligible non-citizens.

The College can be found between East 22nd and 25th Streets in Manhattan, along Lexington Avenue. Situated close to Wall Street in Midtown, Manhattan, Baruch College has the perfect location for its well-known Zicklin School of Business.

Baruch College is made up of three different academic schools, namely: the Zicklin School of Business, the Weissman School of Arts & Science, and the Marxe School of Public Affairs.

The Zicklin School of Business is recognized around the globe as the biggest accredited collegiate school of business in the United States. It provides undergraduate, graduate, doctoral, and executive programs in the field of business.

Baruch has an athletic department that’s responsible for maintaining the Athletic and Recreation Complex (ARC), which provides various facilities such as the Auxiliary Gym, Fitness Center, main gymnasium, pool, racquetball courts, and saunas. Known as the Bearcats, the school’s athletic teams participate nationally in the NCAA.

In addition, the Bearcats have a total of 14 teams in nine sports that compete locally in the City University of New York Athletic Conference (CUNYAC). Women’s sports include volleyball, tennis, cross country, basketball, swimming, cheerleading, and softball. Men’s sports, on the other hand, are comprised of soccer, cross country, basketball, swimming, volleyball, cheerleading, baseball, and tennis.

Some of the most famous Baruch College alumni include: