In this lesson, you will learn how to write numbers in scientific notation.

The basic form of scientific notation is

can be any integer and can be positive or negative.

can also be negative

it could be written as

. All of them meet the requirement above.

Likewise, all the exponents are integers.

Here’s an example of a negative exponent.

To review our lesson in Exponents, we have to change the sign to move the denominator to the numerator.

So since we want to move the denominator to the numerator, we have to write 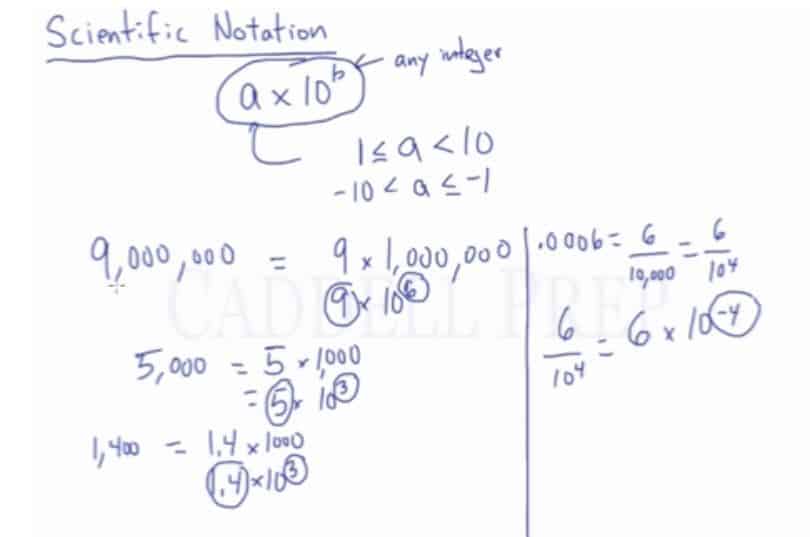 This is a bit tedious work.

Don’t worry. There’s a quicker way to do this!

Then let’s count the decimal spaces from the right of

and stop to get

This goes right in as our exponent.

So now we have

Let’s have another one.

Remember, we need to have a number that is less than

so we can’t have

Instead, we can have

Then let’s count how many decimal spaces are there in

for us to get

decimal spaces. This goes right in as our exponent.

We counted from the right to left. Meaning it’s a big number and we’re making it small.

Now, let’s have a small number.

Let’s get a number between

Then let’s count the decimal spaces to have the value of our exponent.

But remember we counted from left to right. Which means it’s a small number and we’re making it big number.

We have to counteract that by making the value of our exponent negative.

Exponent should be in negative if we have a small number and we’re writing it to appear a big number.

On the other hand, an exponent is positive if our original number is big and we’re writing it to become a small number.

Let’s have one more example.

since we moved three decimal spaces to get

Moreover, it should be in negative because we have a small number.

So the scientific notation is

Another way to look at the value of exponent:

If you moved the decimal to the left, you’ll have a positive exponent.

And if you moved the decimal to the right, you’ll have a negative exponent.