Established in 1846, the University at Buffalo (also known as UB) was officially purchased by the New York State in 1962. It started out as a private institution before being acquired by the state. Since then, UB became a flagship school in the State University of New York system.

The University at Buffalo is a research-intensive institution and it takes pride in the resiliency and innovative thinking of its students. More than 100 undergraduate degrees are offered in the school, along with over 200 master’s programs, almost 90 doctorates, and approximately 10 professional certificates.

Additionally, the school provides a wide range of student activities that include Greek life, student organizations and clubs, intramural sports, and an NCAA athletics club. For those who want to expand their horizons, UB also has an expansive study-abroad program that has exchange agreements with almost 80 different educational institutions across the map. 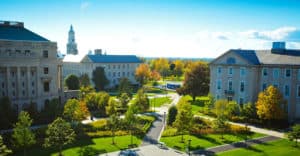 UB is considered moderately selective with an acceptance rate of 57% and EA acceptance rate of 83.6%, which is considerably higher than the former. Although many EA students apply to the school as their first choice and are more likely to be strong candidates, an early application gives anyone an advantage.

Given that admissions at UB are highly competitive, most of its students are exceptionally talented. Admitted students need to have completed a rigorous college preparatory curriculum. Although this coursework is not required, students are highly encouraged to have this as preparation.

Included in the curriculum are four years each of English and social studies and three years each of science, a second language, and college-preparatory mathematics (for example, Algebra I, Algebra II, calculus and trigonometry).

This number includes both full-time and part-time students, as well as graduates and undergraduates. Meanwhile, enrollment for all Doctoral Universities is 51.9% White, 12.8% Hispanic or Latino, and 9.36% Black or African American.

UB encourages students to fill out their FAFSA before making any other financial aid inquiries. This document will determine a student’s eligibility for Pell Grants, SEOG, Work-Study, Perkins Loans, and Federal Direct Student Loans.

There’s also an Honors Program for top freshman students with renewable awards up to the full cost of attendance, as well as other benefits like special seminars, priority registration, faculty mentorship, research opportunities.

University at Buffalo is a public research university with campuses in Amherst and Buffalo, New York. UB is considered as the largest and most comprehensive public university in the state. It is spread across three campuses: North Campus, South Campus, and Downtown Campus.

Also called “University at Buffalo,” the North Campus is a census-designated area situated in the suburb of Amherst. It is where most academic programs are located, including the entire undergraduate College of Arts and Sciences, the University at Buffalo Law School, the School of Engineering and Applied Sciences, the School of Management, the Graduate School of Social Work, and the Graduate School of Education, as well as Lockwood Memorial Library, Oscar A. Silverman Library. It’s also where administration offices are found.

The South Campus is where the School of Nursing, School of Pharmacy, Dental School, and the School of Architecture and Urban Planning are found. The Downtown Campus is the newest UB center and it houses the school’s New York State Center of Excellence in Bioinformatics and Life Science.

Motivated students have the option to earn a combined bachelor’s/master’s degree in as short as five years in several areas of study that include aerospace engineering/business administration, civil engineering, economics/business administration, geography and exercise science/nutrition. Most of these programs shorten the time that it would traditionally take to earn both degrees by nine to fifteen credit hours.

For those who want a graduate degree, University at Buffalo has an extensive array of choices. The university offers such professional schools as a law school, a med school, a pharmacology school, a dental school and literally hundreds of individual programs. Students may pursue master’s degrees or doctorates and professional certificates.

UB is home to many student-run organizations and clubs that cover different interests and subjects. The school has two periodicals run by students: Generation magazine and The Spectrum. These two publications are distributed on campus. Generation gets funding from Sub-Board, a student services corporation and advertisements. The Spectrum, on the other hand, is an independent publication.

UB also has its own student radio station, WRUB. This station broadcasts all UB home football games and select road games, including most UB men’s and women’s home basketball games.

Following President John B. Simpson’s retirement, a university forum has been established by undergraduate students in an effort to develop a thriving online campus. Now incumbent president Satish K Tripathi supported the move, even dubbing it as a “model of University spirit and entrepreneurship.”

Each year, the UB Student Alumni Association (UBSAA) hosts the largest collegiate mud-volleyball game in the world known as “Oozefest.” 192 teams with at least six student members each compete in a double-elimination volleyball tournament at “The Mud Pit” each Spring before finals. To create the mud, fire trucks are brought in to saturate the dirt courts.

Awards are given not only to the winners but also to the most creatively-dressed. Students previously wore business suits and even dresses to the annual contest.

While there are only nine team sports for both men and women in the official UB website, the UB Bulls actually field 11 men’s and women’s athletic teams in sports. Cheerleading in the school is co-ed. Over the years, the bulls have had many athletes take the professional route in baseball, soccer, volleyball, basketball, and football.

The Bulls have had dozens of athletes turn professional in football, baseball, basketball, soccer, and volleyball.

University at Buffalo has more than 230,000 alumni around the globe. The school’s most notable graduates have excelled in various fields such as music, politics, art, business, science, sports, literature, and so on. Here are some of them: