Linear equations can be written in the form;

However, liner inequalities come in several different forms. These forms include:

Graphing such inequalities differs a little from graphing regular equations. Graphing the line in an inequality doesn’t change from the original process, but how the line appears on the graph does change. Any line with a

will appear as a dotted line, because

do not include the values on the line, but rather all the values above, or below it. Depending on whether or not the equation is

, you will shade the area above the line (

greater than) or below the line (

less than). This process doesn’t change much with

inequalities. The only difference here is that there is a line below the symbols

Example:
You have 2 inequalities;

Graphing the first line, you will see that the line is in the same place as if it were written in the form of

. However, the first line has a

(less than but equal) symbol. So here, the line would be solid, and you would shade the area below the line. For the next equation,

, there is a > (greater than) symbol. This means that the line would appear dotted and the shading would be done on the area above the line.

In the end, you have an area where the shaded areas of the two lines overlap. This area is your solution. The values in this area satisfy both 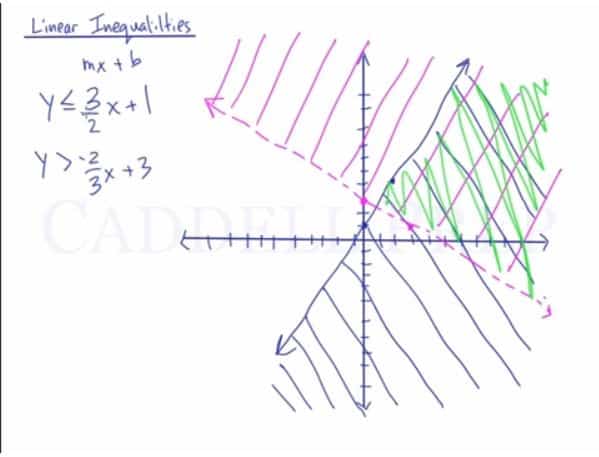 The inequality already has “

Plot as a solid line because it has

(less than but equal) symbol and shade the area below the line. 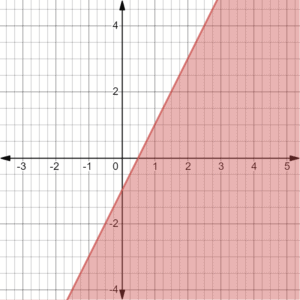 Plot as a solid line because it has

(greater than but equal) symbol and shade the area above the line.

Plot as a dashed line because it has

(less than) symbol and shade the area below the line. 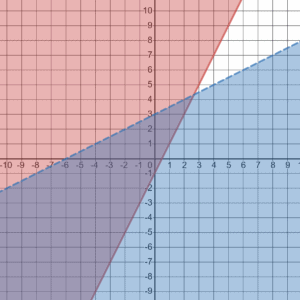 Linear equations are equations that have an equal sign and generally has two variables.

An example of a linear equation is

which is the equation of a line.

are to the first degree.

So if we have linear inequality, it’s going be the same form but instead of an equal sign, we’ll have an inequality sign.

It may also not be in the same format. We need to solve a regular equation.

What does inequality exactly mean?

This will affect the way we graph our solutions.

Since we know that

-intercept, we can now graph this.

, let’s graph as if it’s an equality.

is less than or equal to. That means we also want the values of

below the line. But not the values above it.

So let’s shade the area below the line.

Our solution now is the values on the line and all the values below that line.

Let’s have a second one:

We’ll have a backslash line.

is greater than but not equal to.

To represent the “not equal” we draw a dotted line instead of a solid line.

Then shade the area above the dotted line because it is greater than.

Now, if you were given these two systems of functions, the point that satisfies both of these inequalities are represented by the area which is shaded by the two inequalities.

If you were asked to identify a point that satisfies both inequalities, you can pick

But any point in the shaded area is the solution.