To solve, we are going to take

and substitute it into the first equation where we see

Since it is a quadratic, we want to get one side equal to 0 so we can factor. First, add 2 to both sides to get

Then subtract 2x from both sides to get

When we factor, we get

Set each factor equal to 0

Let’s go over solving a system of equations algebraically for linear and quadratic functions.

This is very similar to how you solve a system of equations except we have a variable raised to the second power.

Now, let’s substitute one expression to the value of the other equation.

In this case, let’s get the second equation and substitute it in the first equation.

Like normal, we’ll have one side of it to be equal zero.

-term so we’re going to factor this.

Now, we have two factors which is each equal to zero.

Now, let’s solve for the value of

by substituting the value of

in one of the equations.

Here, our answer is

Here, our answer is 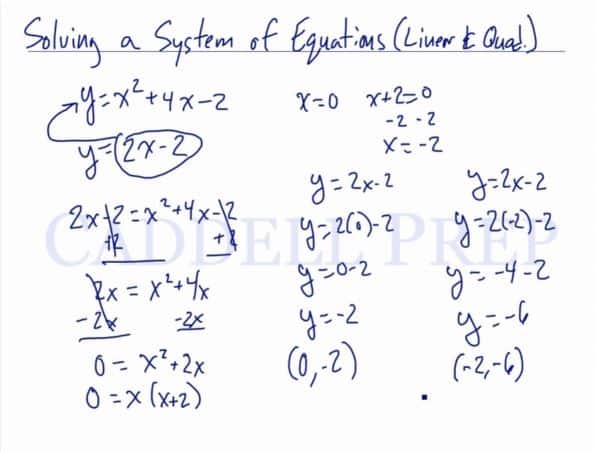 Let’s try another system of equations.

Same thing, let’s substitute the first equation as the value of

in the second equation.

Same strategy. Get one side to be zero.

Now, let’s substitute the values of

to get the value of

Let’s use the first equation.

So our answers are: