In this video, we are going to simplify rational expressions. After you finish this lesson, view all of our Algebra 1 lessons and practice problems.

It’s just like reducing fractions. Begin by simplifying the constants.

Now let’s look at an example where there is an operation taking place in the numerator.

Here we can separate into two separate fractions

When there is an operation in the denominator, we cannot simply do the same thing. Instead, we must factor each term by its greatest common factor. For example:

The greatest common factor for all three terms is

from each term, we are left with

in the numerator and denominator will cancel out, leaving us with a final answer of

To solve something like this, we can factor the quadratic in the numerator and denominator. In this example, we would have

From here, we could cancel out the (x-4) from the numerator and denominator, leaving us with

First, factor both the numerator and denominator of the fraction.

Then, reduce the fraction by cancelling out

First, factor both the numerator and denominator of the fraction.

Then, reduce the fraction by cancelling out

Let’s go over how to simplify rational expressions.

We want to reduce this.

What we have to do is reduce it just like reducing normal fractions.

Reduce the constant by finding the greatest common factor. Which is

Then, to divide the

-term stays at the denominator because

So our answer is

Let’s try this one

Let’s look at one more

Here, think of a number that goes into both of these.

Then subtract the exponents of 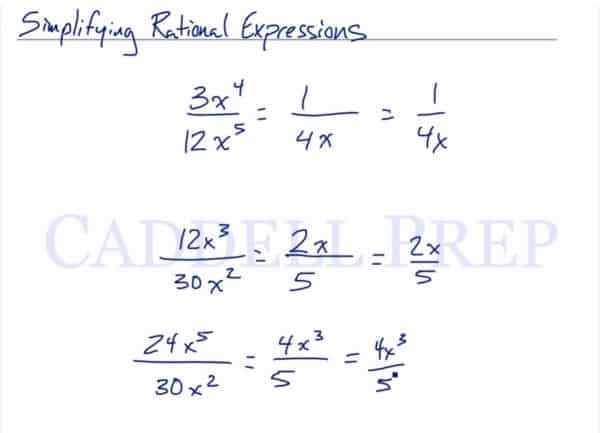 The difference on the exponent stays at the numerator because it’s higher.

If we have two terms separated by a plus or a minus sign, we can actually split them up.

We can write this down as

Then let’s solve each

Let’s look at another one.

It looks like the first example but it’s flipped. This has a monomial numerator and a binomial denominator.

In the first example, we can split the binomial into two because it’s in the numerator.

So, we keep it as it is. And then reduce it from here.

Now, let’s get the greatest common factor which goes into all of these terms.

What number goes into

Then let’s get the lowest exponent for

The two examples look similar but we end up with different answers.

This is another type of rational expression.

Since the numerator is separated by minus, we can split them up.

This is how to try to do it.

We can’t get very far in reducing this. There is only one greatest common factor for each.

In this case, this is not the best method.

What we want to do is just to factor from the beginning.

Now that we have two factors, we can cancel this out.

And we’re left with