We will discuss permutations and combinations. After you finish this lesson, view all of our Algebra 1 lessons and practice problems.

In the first video, we are going to work with permutations.

We have three cars, the blue car, the white car, and the green car.
We can have different orders of:
B W G,
B G W,
W B G,
W G B,
G B W, and
G W B
which adds up to the total number of order of 6 possibilities.

Another way to look at this would be thinking the cars in order:

We can simply use factorial, “!” to solve this kind of questions.

For 4! the expression can also be written as

from the given number to 1

Multiplying the numbers together and we have 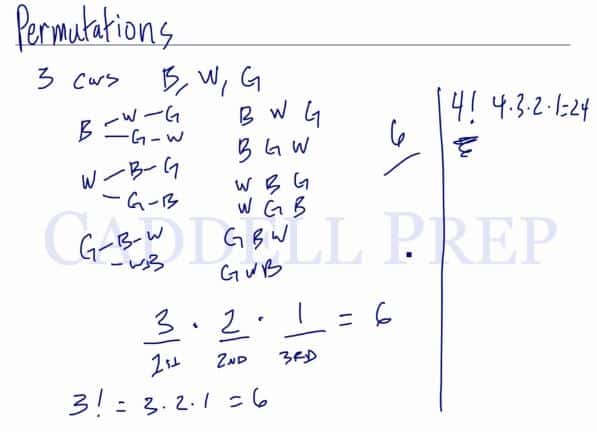 Let’s work on another example:
If there are 5 cars, in how many ways can they finish for the first three cars?

In this situation, we cannot directly use 5! because we are not finding the order for all five cars.
Instead, we can apply multiplication up to the desired order, to which we call permutations. We use permutations in situations where the order and position matters.

On a calculator, we can type in the first number, press MATH/PRB nPr, and enter the second number. The answer is the same in both situations.

digits in a specific order, the digits are between

. How many different permutations are there if one digit may only be used once?

Since we are told in the question that one digit only may be used once it limits our number of combinations.
Therefore,
10

In how many different ways that

pool balls could be arranged out of

For example, there are three cars. A blue car, a white car, and a green car. We want to see how many different ways we can place them in different orders.

different ways that these three cars can be placed.

Another way to think about this is like having first place, second place, and third place.

The number of cars that can go into first place is

But after one car is placed on the first spot, there are only two cars left.

Then after the first two spots, only one car is left for the third place.

If we multiply these three, we’ll get

This is the same as

If we have four cars, we do four factorial

If we’re going to count for all the places, we could use this thing called factorial.

Let’s look at this example.

a) How many can they finish,

If we multiply these together:

This is because five cars can go first. Then only four to go second and three will battle for the third place. Then only two will remain for the second place since three spots have already filled in. Two can be in second place and lastly, one will be in the fifth place.

ways that these five cars can finish.

b) How many can they finish,

Here, we can’t do factorial because we won’t have the last or fifth place.

Doing this also gave us the same answer as the first one because the last one is inconsequential.

It is inconsequential because, after the fourth place, there is only one car left. It wouldn’t change the number of outcomes.

c) How many can they finish,

d) How many can they finish,

e) How many can they finish

can possibly come in first place.

Permutations are similar to factorials except we don’t finish the entire thing.

different numbers and want four outcomes, we’ll start with the total numbers we have then write the number of spots we’re going up to.

This will multiply all the way down to

In solving letter c, we’ll have

Letter d will be solved as

And the answer to letter e is

These two are interchangeable.

This means we’ll start at

and multiply the first

We don’t stop at number

, we stop at the fourth spot or number.

In a calculator, we can just type this in.

Go to Math then Probability then choose nPr which stands for a number, permutation, and a second number.

This gives us the same answer.

When do we use permutation?

We use permutation if order or position matters.

For example, if we have first place, second place, third place, and so on with distinct order, we use permutation.

Or we pick people to be President, VP, Secretary, and Treasurer, we can also use permutation.

Let’s say there are

students running for the student council with

available positions which are President, VP, and Treasurer.

Let’s say we have another

students to form a team of

with no distinct position and order doesn’t matter, then we do not use permutation.

Remember in a permutation, there is a distinct order or position that matters.

In the second video, we are going to work with permutations with repeated elements.

For the word KNEE, there are three distinctive letters with the letter E being repeated twice.

If we were to reorganize the letters around to form another order, then we would also use factorial like in the last video. The only difference here is that since there is a repeated element, we need to divide the number of total outcomes by the repeated outcomes.

Examples of Permutations with Repeated Elements

We’ll have permutation with repetition. 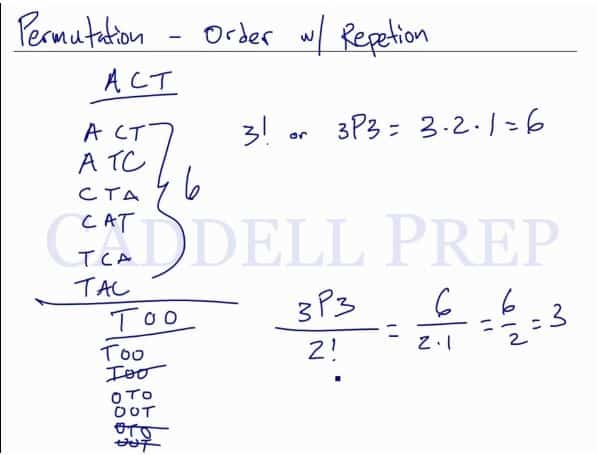 For example, the word ACT. Its letters A-C-T can be reordered in

Now, let’s look at the word TOO. Let’s reorganize this

TOO
TOO
OTO
OOT
OTO
OOT

Here, there’s not much difference since there are two letter O’s.

There are arrangements that are similar to another because of the same letter.

So, you can’t just do factorial or permutation.

Instead, we should do this:

Let’s look at another example and this will make a lot more sense.

Let’s reorganize the letters in the word KNEE.

Let us look at the word TATTOO

Let’s look at the word DIVIDEND

If you have repeated letters or items, just do the permutation like you would
normally divide by the factorial of the number of repeated items.

In this video, we are going to work with combinations.

Combinations: Number of orderings where order doesn’t matter.
We can use the formula: nCr

to find the combination.

We would have 5! on the top and 3! 2! on the bottom, which is similar to permutations with repeated elements. 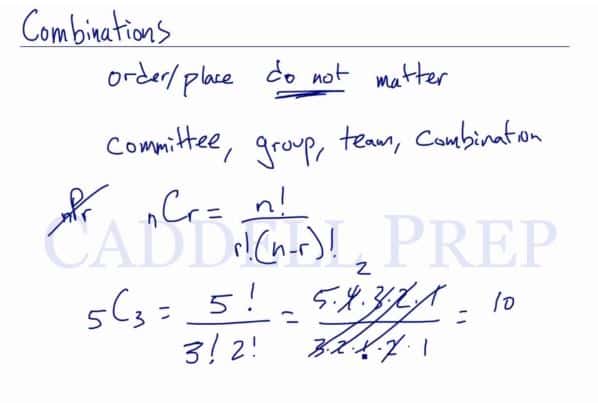 Jones is the Chairman of a committee. In how many ways can a committee of

people given that Jones must be one of them?

Jones is already chosen, so we need to choose another

In choosing a committee, order doesn’t matter; so we need the number of combinations of

The number of combinations of six objects taken two at a time.
6C2

This is a way of finding how many ways can be done where order or place do
not matter.

When we form a committee, or a group, or a team, or a combination and order don’t matter, we’re going to use this formula to solve:

This may seem complicated but it’s really not that bad.

Let’s look at another example:

We can also use the calculator here.

Let’s have this example.

students in a class.

of them will be given class duties for the week. How many groups of

Here, the order doesn’t matter because there are no distinguishing factors among the students chosen.

In this case, we’ll use the combination.

This is much easier using a calculator.

Next is we have

students to be picked for class office – Pres., VP, Sec., Treasurer, and Judge.

What’s important is that there are five distinct order or places. It’s not just a group of

people each one has a specific position.

In this case, order matters. So, we’ll use permutation.

There is a distinct difference between the combination and permutation.