In this video, we are going to apply inverse variation. After you finish this lesson, view all of our Algebra 1 lessons and practice problems.

Inverse variation is the opposite of direct variation, where the increase of one meets the decrease of the other.

First, let’s use the equation t1T1=t2T2 where t is time, T is temperature

Divide 80 from both sides to isolate x

So it takes 1.5 hours for the ice to melt 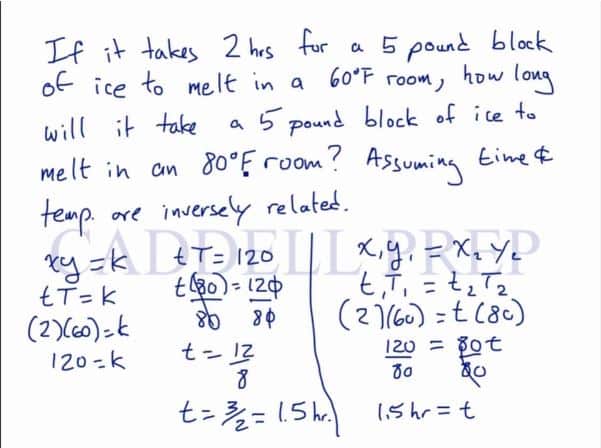 But they always divide and equal to the original number.

Notice that when miles go up, gallons also increases.

Likewise, when miles go down, gallons used will also go down.

Every time you will have

Now, inverse variation is the opposite.

In this case, if

Just like in direct variation where you have proportion, in our example miles travelled over gallons used.

Here, we can use miles travelled to gallons remaining.

If you drive far, the number of gallons left in the car is going to go down.

It might not match this equation but this gives you a better idea of what inverse variation is.

When one goes up, the other one goes down.

Let’s look at some examples.

This example isn’t necessarily factual, we’ll just use it to demonstrate inverse variation.

pound block of ice to melt in a

F room, how long will it take a

pound block of ice to melt in an

This makes sense because when the temperature goes up, we expect that time it takes to melt to go down.

Likewise, when the temperature goes down, we expect it to take longer for it to melt.

We can solve this in two different ways.

Either way, we will get the same answer.

Let’s use the first method first.

Therefore, we know that our constant

Now, let’s look at the second part where

, and we need to find how long will it take to melt if the room is

We’re not going to solve for the constant here, we’ll just go straight into the equation.

At this point, we have the same step with the first method.

When things are inversely related, things to remember are:

1. when one goes up, the other goes down
2. when multiplied, will equal a constant