As mentioned before, all functions can only have one y-value for each corresponding x-value. Any continuous graph that has more than one y-value for a single x-value is not a function but is a relation. After you finish this lesson, view all of our Algebra 1 lessons and practice problems.

Example of Formalizing Relations and Functions

Is the following relation shown a function?

The answer is no because the 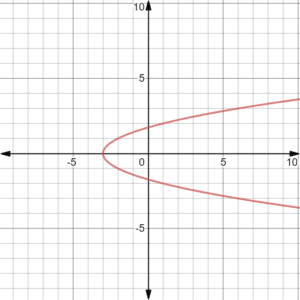 Now, we do the vertical line test. 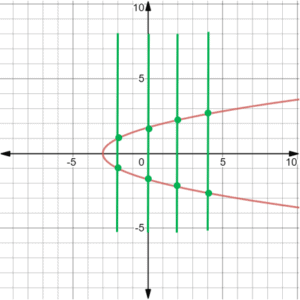 This is not a function since the vertical line touches the graph twice.

This is a function machine for

, this means that the function is dependent on the value of

Let’s draw a table which consists of

So if we put

in the function machine, it will come out

Keep on going and we’ll have

The most important thing to remember for functions is for every

value, you will have at most one

Let’s look at this on a graph.

Plot the points on a graph.

We’ll have a straight slash line on the graph.

Let’s look at some more.

If we look at these graphs, one

value has one corresponding

Let’s do a vertical line test on these graphs.

Vertical line test tests if a graph is indeed a function.

If the vertical line intersects the graph at only one point every time, then that is a function.

Even if the vertical line doesn’t touch the graph, it’s okay.

As a rule, we can have at most one

value. So if there is no

But we can not have two

values at the same time.

Let’s draw another graph with a line that has a lot of curves.

You’ll see that at one point on the graph, the vertical line touched the graph multiple times.

This means for one

value there are three

Therefore, this is not a function. 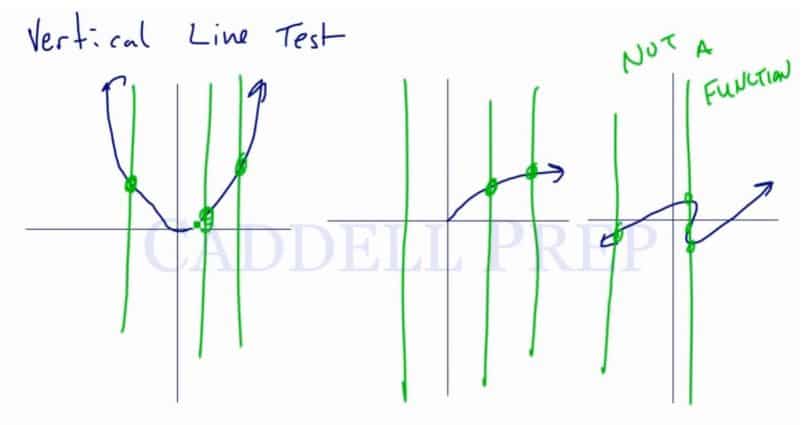 Let’s look at a graph of a circle.

Now, we’ll have a special graph – an absolute value graph.

This means this is a function.

value there is only one

Let’s move on to relations.

Relation may have more than one

, you can see that

Therefore, this is not a function but it is a relation.

But if let’s say we change

then this will be a function.