In this video, we are going to look at exponential growth. After you finish this lesson, view all of our Algebra 1 lessons and practice problems.

For a graph to demonstrate exponential growth, the coefficient, a, must be positive, and the base of the exponent, b, must be greater than 1. The graph will follow a path that curves upward to the right. These graphs grow by a factor, as opposed to a constant value.

curves upward after plotting points as shown in the video, and demonstrates exponential growth. This graph grows by a factor of 1.2.

The population of Greendale in

was estimated to be

people with an annual rate of increase of

. What will be the estimated population in year 2020?

After one year the population would be

.
By factoring, we have

or initally, the population is

Therefore, the estimated population in the year

deposited in the bank, and receive a

interest annually. How much is the money in the

After one year the money will be

.
By factoring, we have

or initally, the money deposited is

st year, we have

nd year, we have

rd year, we have

Therefore, the money will be

The basic exponential function is

is always positive and

If we look at the exponential growth graph, it will look like this.

Where each point is some fact greater than the next one.

Let’s get a financial calculator to solve this.

So the question is how do we get to these points?

Each time we’re just multiplying by

The next point is

Each time we multiply by

. It multiplies by the constant

It’s not going up by a said amount. Here, the increase in

value is increasing in itself.

Whereas when we have a linear graph, it goes up at a constant rate each time.

Here, the jump in

values are linear. The increase or decrease is the same in the entire time.

Just to recap, exponential growth has

as an exponent for it to be exponential, growth is a positive number greater than

Exponential growth grows by a factor.

So you keep on multiplying by a certain number to get a new value.

An example is a compound interest. Each month money may grow by

or some value compared to the previous one.

Whereas, linear growth grows by a constant value.

For example, your money grows by

On the other hand, exponential growth may grow your money depending on the percentage.

Let’s look at an example:

Let’s start with savings account b where money grows by

or initally, we have

Now, let’s do savings account a where it grows

or initally, we have 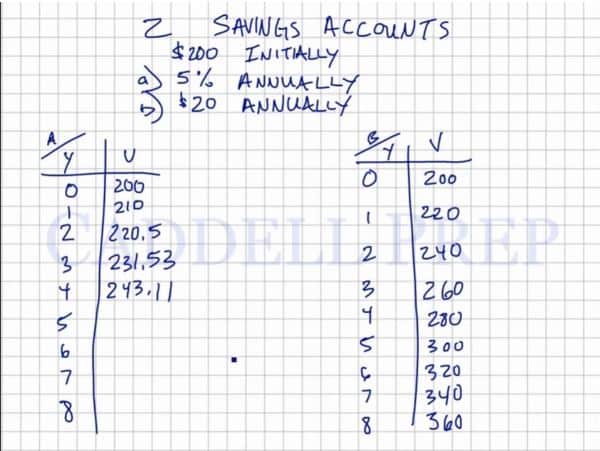 Take note that the previous amount grows by

. So we add the increase to the previous amount to get the new value.

Let’s make an equation for this.

Let’s compare it to the one that grows

So far, we have no increase of more than

growth. But still not there yet.

years, we have an

, it grew by almost

It grows slower, depending on the numbers you’re comparing it to. But after a said amount of time, it will grow at a much greater rate. And will eventually pass the other one.

What if we have a

So right off the bat, it improved by

, it grew by more than

The compound interest or exponential growth will quickly pass the linear growth.