In this video, we are going to divide radical expressions. After you finish this lesson, view all of our Algebra 1 lessons and practice problems.

One simple example is:

By simplifying the numerator and the denominator, we now have

A slightly more difficult problem would be:

Just like the other problem, first find perfect square factors for each expression

And the final answer is

If the expression has a radical in the denominator and a rational number in the numerator, then it is necessary to rationalize the fraction.
For example: 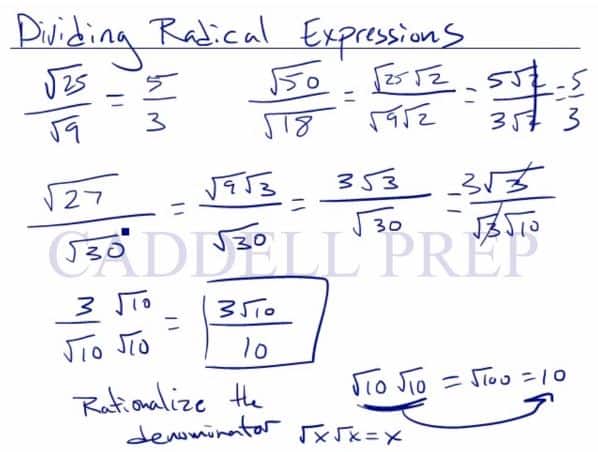 Since the denominator has a radical, we have to rationalize the fraction.
Multiply the numerator and denominator by

The final answer is

Let’s go over how to divide radical expressions.

And there’s not much to do.

But what if we have

will be cancelled out.

will be cancelled out.

So our answer is

Of course, not all is going to work out like this.

Now, let’s break this down.

This is how far we can go as far as the radicals are concerned.

But this is not our final answer.

Because we don’t want a radical in the denominator.

But even more so, we can reduce this.

Another way to look at that is:

cancels out and we’re left with

Now, let’s apply this in solving. Let’s go back

We can break this down even more into

is going to cancel out.

Now, we want to rationalize the denominator.

The trick in getting rid of

is to multiply the numerator and denominator by the same number.

This is our final answer

Now, let’s look at some more.

Let’s break this down

Now, we don’t want a radical in the denominator.

We have to rationalize it. So let’s multiply the numerator and denominator by

Which we cancel and we’re left with our final answer

correct way to solve it.

Any way you solve for the correct answer is a good way to do it.

Let me show you another way.

We can reduce this right off the bat.

, so this can be reduced to

Two different options to solve the same problem. We have the same answer both ways.