Alfred University, also known as AlfredU, is a non-sectarian institution established in 1836. Considered as the Select School by Seventh Day Baptists, its setting is rural and has a size of 600 acres. The school is a small, private university in Alfred, New York.

Home to approximately 1,707 students in 2018, it makes use of a semester-based academic calendar. Its location offers a great opportunity for students who prefer a small-town atmosphere instead of a highly-urbanized and fast-paced environment. Should you want something different, AlfredU offers a “study abroad” program as well. The institution houses five schools and colleges. 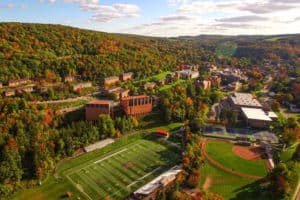 The admissions process is considered somewhat competitive in AlfredU with its 63% acceptance rate. Admissions are quite selective and an estimated one-third of applicants will not make it to the school’s accepted student roster.

Successful applicants usually have SAT scores and grades that are either average or better. Students who have strong grades and high test scores may apply for the Honors Program offered by Alfred University. More details about this academic program, including requirements and qualifications, can be found on their official website.

For the 2017 to 2018 academic year at Alfred University, the tuition is $27,124. This amount is 2% cheaper than the national average private non-profit four-year college tuition of $27,755. The cost is also 23% more expensive than the average $22,120 tuition for four-year colleges in the state of New York.

The tuition also ranks 113rd in New York amongst four-year colleges for affordability and is the 73rd most expensive four-year college in the state. The price is the same for all applicants, whether they are from the New York state or not. There is an additional fee amounting to $990 on top of the tuition, bringing the total amount to $28,114.

Alfred University is famous for providing programs in glass engineering, ceramic art, and ceramic engineering. They also have an excellent astronomy program partly because of the presence of the 7-telescope Stull Observatory on the campus, which has one of the biggest optical telescopes in the entire state. Asteroid 31113 Stull was named after John Stull, the founder and caretaker of the said observatory.

Two libraries are housed on AlfredU grounds: the Herrick Memorial Library and Scholes Library. The Herrick Memorial Library mainly serves the private colleges while the Scholes Library is primarily dedicated to the New York State College of Ceramics. The Alfred Ceramic Art Museum is known for its vast collection of 8,000 ceramic objects, which has both ancient and modern ceramic art and craft.

There’s also the Bromley-Daggett Equestrian Center constructed in 2005. Situated at the Maris Cuneo Equine Park, this building hosts equine classes, an intramural equestrian team, varsity and JV for both English and Western disciplines, clinics, and horse shows. University students can board stalls in the center.

With class sizes averaging 18 students, lectures and lab research at Alfred University are conducted with a 13:1 student-to-faculty ratio. The school is known for honing the habits, skills, and qualities the global 21st-century economy is looking for. Alfred University is keen on cultivating a “can do” attitude about inventing solutions and creating innovations for the generations to come.

Some of the most popular majors in the university are Fine/Studio Arts, General, Mechanical Engineering, General Psychology, General Business Administration and Management, and Elementary Education and Teaching.

At AlfredU, more than 100 organizations and clubs are available for students to choose from. There are also several honor societies in the university with members who are chosen for their excellence in a specific field of study. Meanwhile, other honor societies invite members according to their overall academic performance.

There are many clubs that bring together students who are in the same minor or major, or those with a common passion or interest in a particular academic area. Some of them are:

AlfredU had fraternities and sororities for almost 100 years before 2002, when the Greek organizations were discontinued. The move was made partially in response to the passing of Zeta Beta Tau (ZBT) fraternity member Benjamin Klein under suspicious circumstances and charges of gross negligence on behalf of the fraternity.

The school takes pride in having more than 400 student-athletes who combine sportsmanship and scholarship. These Alfred University students compete in 19 NCAA Division III intercollegiate sports and four varsity sports. They also have the privilege of enjoying state-of-the-art wellness and athletic facilities exclusively offered on the campus.

AlfredU teams are part of the National Collegiate Athletic Association’s Division III, except for the alpine skiing team which is under the USCSA and the equestrian team which is governed by the IHSA.

Alfred University has produced many accomplished individuals in the fields of literature, art, sports, business, engineering, entertainment, business, and politics. Some of them include: