Apply a reflection over the line x=-3

Since the line of reflection is no longer the x-axis or the y-axis, we cannot simply negate the x- or y-values. This is a different form of the transformation.

Repeat for points B and C. In the end, we found out that after a reflection over the line x=-3, the coordinate points of the image are:

Apply a reflection over the line y=-1

The procedure to determine the coordinate points of the image are the same as that of the previous example with minor differences that the change will be applied to the y-value and the x-value stays the same. 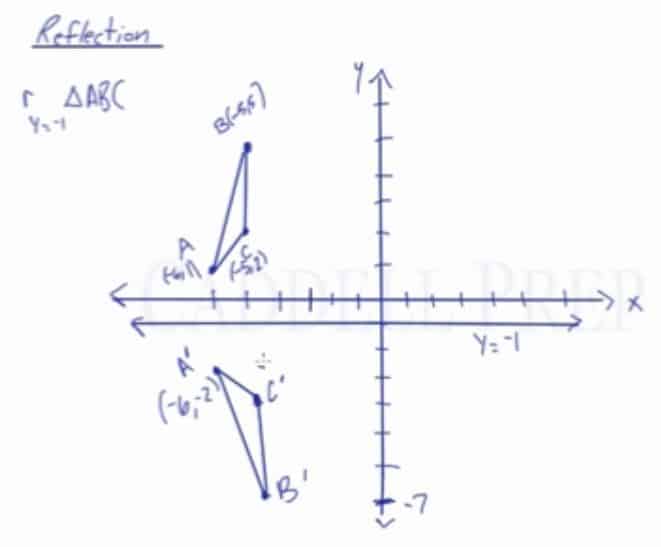 Let’s say we want to reflect this triangle over this line. A line

This line is called

because anywhere on this line

and it doesn’t matter what the

Graphically, this is the same as reflecting over the

units from the line

units to the right of it. Keep the same height. And we have

units away so we’re going to move

units horizontally and we get

units from the line so we go

units to the right and we end up with

The reflection of triangle

Probably it’s best to do this graphically then get the coordinates from it.

Similarly, let’s reflect this over a vertical line.

because anywhere on this line is

, it doesn’t matter what the

We’ll treat this the same way as we treat everything so far in reflection.

spots away from the

spots below it. And we end up with

spots above the line so we’ll go

spots below it. We end up with

spots away so we’ll go

Now, we can draw a triangle.

We’re able to get the new coordinates graphically by graphing it.

As we look at it, we can now figure out the coordinates.

Looking at the graph, we’ll see that: