In this video, you will learn the basics of proving triangles are congruent.

The Angle-Side-Side (ASS) or Side-Side-Angle (SSA) is not applicable to prove triangles congruent. They are commonly known as a donkey and are not acceptable. Use the HL Theorem instead. 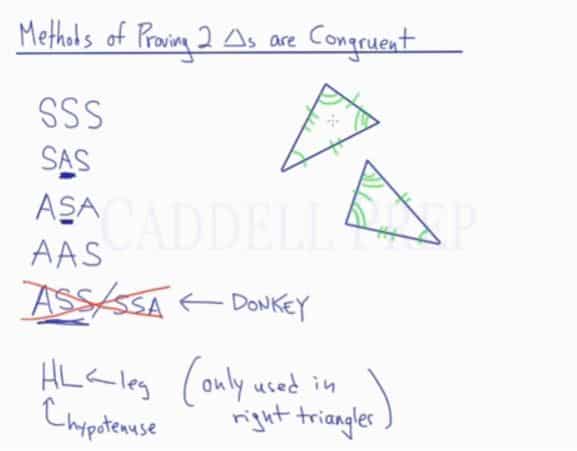 In this lesson, we’ll go over methods of proving triangles are congruent.

What do congruent means?

But not just same angles, because they are just similar, they should also have the same sides.

All the angles and all the sides should be congruent.

How do we prove that these two triangles are congruent with each other?

Well, we don’t have to prove each and every angle and side.

There are just a few things that we need to prove congruent. If those are true then we know for a fact that everything else is congruent as well.

Methods of proving triangles are congruent:

1. Side-Side-Side (SSS) – we have to prove that all three sides are congruent.

2. Side-Angle-Side (SAS) – what’s very important here is that the “Angle” is written between the two sides. Because in the diagram, the angle is in between two sides as well.

You should not use an Angle-Side-Side (ASS) method or Side-Side-Angle (SSA) method.

When you use any of these methods, you will be a donkey.

Just a review, two triangles are congruent if everything about them is the same.

But to prove that they are congruent, we don’t have to individually prove each angle and side of these two triangles.

If we can prove any of these methods to be true, then we know that we have two congruent triangles.